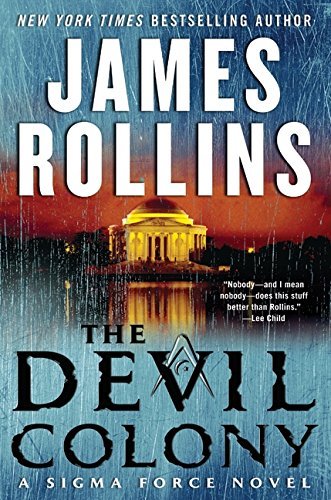 “Mr. Rollins has the unique quality of leaving his readers teetering on the brink of disaster at the end of every chapter and scene, only to have the situation resurface several scenes later when he has taken those resilient filaments and woven them into a tight web.”

Gold, Fort Knox, an underground river of mud, the lost science of alchemy, and a mysterious silvery-dry elixir are only a few of the elements that James Rollins throws into the cauldron of intrigue he calls The Devil Colony.

In his latest Sigma Force thriller, Mr. Rollins starts wrapping the strong filaments of his web at a point in history where a team is searching for the mysterious “head of the serpent” in an Indian burial mound in Kentucky. Once this item is located, the story leaps into present day with the discovery of an ancient burial cave in the Rocky Mountains of Utah, where an unforeseen explosion brings the Sigma Force team into an investigation and the discovery of an unstable compound of neutrinos.

Painter Crowe, the Director of Sigma Force, is drawn into the investigation on a personal basis when his niece, Kai, is determined to have been intimately involved with the explosion. The returning Force team members—Grayson Pierce, Monk Kokkalis, and the ever-mysterious Seichen—find themselves pitted against the omnipresent enemy, The Guild, as both groups rush to determine what extraordinary force lurked behind the explosion.

Cryptic clues drive both teams on a parallel course of discovery, at times sharing the lead, at other times chasing one another through life-threatening situations. A body of evidence brings them face to face with world history from the disappearance of the Anasazi People to the lost Tribes of Israel and with each discovery they are given new, more mysterious signs in the form of seals and ancient writings and previously unknown elements that present the possibility of earthly annihilation.

And yet as both groups clash, bringing death and destruction to many, they come to the realization that an alliance must occur. What could possibly drive the skills of Sigma Force and The Guild to forge such a tenuous treaty? Nothing less than this very destruction of Earth by a freakish event set in motion centuries before. While the reader knows that Sigma Force members will rise to the occasion, the thrill of the read is learning how they achieve that rise and what toll they must pay!

Mr. Rollins takes the reader from the Rocky Mountains to Iceland and back to the American West through a wake of destruction and death before the final event ticks down the seconds to . . .

Anyone familiar with author Rollins’ Sigma Force characters will not be disappointed. Each returning individual brings their own personal skills to the game while the Guild team, lead by the darkly sinister Rafael, does not fail to stir fear and vengeance in the reader. The narrative is exciting, and Mr. Rollins has the unique quality of leaving his readers teetering on the brink of disaster at the end of every chapter and scene, only to have the situation resurface several scenes later when he has taken those resilient filaments and woven them into a tight web.

One tiny SPOILER ALERT about this story: Don’t worry about the dog!