Desperation in Death: An Eve Dallas Novel (In Death, 55) 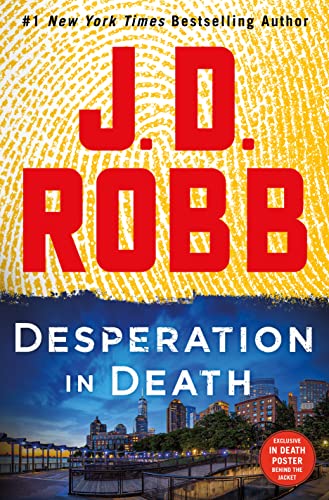 “A welcome entry in the series, tackling a current crime that will undoubtedly continue its insidious way into the future.”

It’s New York City, 2061. At 1 Police Plaza, Lieutenant Eve Dallas is beginning a case that hits too close to home.

A 13-year-old young girl has been found murdered, impaled on a jagged wooden spike. Her clothes and appearance suggest she was well cared for and the violence of the crime indicates someone who hated her. Another person’s blood is found on her clothing, and that other person may or may not be her killer.

Records indicate she is Mina Cabot, abducted a year before while walking from school to her home in Philadelphia. Further investigation reveals the blood to be that of Dorian Gregg, a runaway with a petty crime record who disappeared a year before also.

“A pretty young girl walks the half mile home from school—same route every day. That makes a snatch easy. But the nice neighborhood makes it stickier. Somebody took some time, to watch, to plan.”

Investigation determines the girls were taken as part of a child trafficking ring, imprisoned somewhere, groomed and trained, readying them for sale at an auction to happen soon on the Dark Web.

This hits too close to Eve’s own situation as a child, with the fate her own father planned for her before she escaped.

“It didn’t matter, she reminded herself. Unless her own experience somehow applied, somehow helped their investigation, it didn’t matter.”

It also opens up old wounds for Roarke, of his own childhood and how it was torn apart by his father’s crimes and the life he led before being found by Summerset. The old man who became Roarke’s savior and now his amanuensis also is stirred by thoughts of the death of his daughter, and how she had no one to act for her, as Eve now acts for the abused children she seeks to free.

“. . . they killed her. My child. I think they wouldn’t have been able to do so if there had been a cop like you, in that place and time. But there wasn’t, not then, not there.”

First, they have to find Dorian, if those who abducted her haven’t already re-caught and disposed of her. Then they’ll take down the ones responsible for Mina’s death.

With a dip in the negligence of the city’s present Child Services, indifferent caseworkers, and mothers scamming the system, readers may find contemporary comparisons indicating things will not have changed so much, at least in the author’s imagination.

Old memories and old fears may resurface but with Roarke’s help, Eve will keep them at bay as she searches the Big Apple for one frightened child who also wants revenge for the death of her friend.

This is the 55th entry in the In Death series featuring Lieutenant Eve Dallas of the NYPSD and her husband, Roarke, the richest man in the universe. It also draws in nearly every member of Eve’s police team, and—for those who may have missed a few novels—with the entry of each character it’s like seeing old friends again. They’ve all progressed and changed and aged a bit, but they’re still recognizable and a sight for sore eyes.

The banter between Peabody and Eve is still present, though perhaps not as sharp as usual as Eve immerses herself in the case, and the memories of her own situation are dredged to the surface, but Roarke is there to soothe and assist, and Eve realizes that, for the sake of the case as well as the victims, she has to keep it together.

A welcome entry in the series, tackling a current crime that will undoubtedly continue its insidious way into the future, the hardcover edition of Desperation in Death also features an exclusive bonus of an In Death poster behind the book jacket.