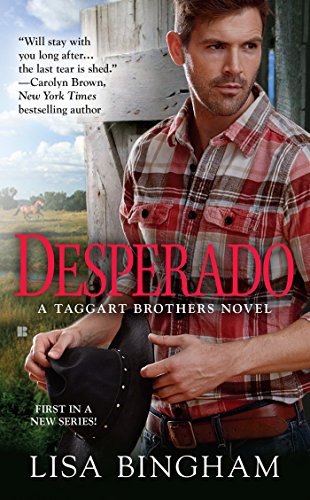 Prairie Dawn Raines has problems, and they don’t end with being (probably) named after a Muppet. After a tough and troubled childhood at the hands of neglectful, hippie parents, P. D., as she prefers to be called, clawed her way through college and worked her way to a plum job as a physicist. When that didn’t fill the emptiness in her soul, she dropped out of the rat race and settled down in Bliss, UT. Now owner of her own jumping restaurant, P. D. needs money to expand her joint.

It’s a good thing that the inaugural year of the Wild West Games is offering a $10,000 prize! Unfortunately, P. D.’s partner for the games, Bodey Taggart, has broken his leg. With plucky pioneer spirit, P. D. and Bodey decide to rope Bodey’s brooding, tormented (and gorgeous, of course) older brother into helping out. After hemming and hawing and a little bit of guilt, ex-Navy EOD specialist and recent widower Elam Taggart steps in and the story is off and running!

The first in a planned series about the Taggart brothers, Lisa Bingham’s Desperado is a light-hearted romp of a story, full of instalust and misunderstandings. There are information dumps (P. D.’s entire backstory is dropped into the first two pages of the novel) and physically impossible feats, such as learning to shoot like an old-timey sharpshooter after a single lesson, but those things hardly matter in a story like this.

P. D. is plucky, Elam is “hawt,” and the story is fun. Descriptive visuals of teams of modern Americans racing through the Utah foothills in period garb are funny and well done, and Bingham has done her research on guns, horses, and corsets. Though the inner monologue of the characters is a bit moony and some of the dialogue cliché, there is a sprightliness to the narrative that makes the book an easy read.

Of course, the real point of a story like this is the sex, and once Bingham eases out of the realm of “slanting lips” and “battling tongues,” she brings the heat. Her sex scenes are well written (perhaps more well-written than the kissing and petting), and should satisfy most readers of the genre.

Bingham also shows a good eye toward when to dial things back and bring on the love. Sure, true love after knowing each other for less than two weeks is a fairy tale, but P. D. is due for a little magic, and Bingham has the maturity to set her couple up for a little “courting” after the narrative curtain closes.

All in all, despite some issues with information dumps and continuity errors, Desperado is an enjoyable read, sure to suit lovers of contemporary romance set in the West, whetting their whistle for the next books in the series. At one point, P. D. calls Elam, “My own private cowboy;” that would be a fitting alternate name for this froth of a novel.

Now, if there was only an explanation of how one removes knee-length pantalets while one’s legs are wrapped around that cowboy. . . .