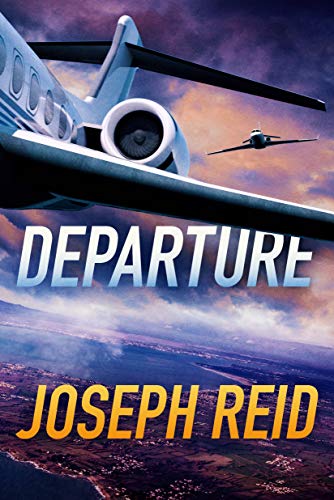 • a dangerous situation with high stakes

Departure hits all the points on the checklist, and enhances them with a very likable hero. In this, volume 3 of the popular Seth Walker series, we also get a goodly dose of his backstory (a doozy!), inserted after the primary situation is established.

Seth is an air marshal who became an investigator for that service after his cover was blown in an earlier case. Still, all his cases revolve around aviation. Departure is set almost exclusively in airports or aboard aircraft, which at first might seem restricting but proves to be a broad and complex world where all sorts of things can happen.

The plausibility factor in this story comes from good research augmented by echoes of real events most of us have heard about on the news. Perhaps these are where the author gets his ideas. In book 3 he again strings the pieces together into a ticking-clock thriller with all the twists and turns of a first-rate mystery.

It starts when a young electrical engineering genius with ties to U.S. enemy countries suddenly goes missing before boarding his flight—right before the U.S. vice president is scheduled to arrive at the same airport. Evidence and inference suggest a terrorist attempt, which would put both the VP and everyone in the San Francisco airport in jeopardy.

The big question is whether the missing man is a victim or a killer. Available intel makes it look both ways at the same time. Seth is tasked with tracing the engineer’s path through the vast airport, following security camera sightings, to see what dangerous thing he might have left behind, or whom he might have connected with, that would threaten the public and the facility. Because of the tight time window, Seth must do this at a run.

Connected to the crisis is Seth’s former employer, from whom he parted company in a bad way five years previous. Readers have been clamoring to know this backstory, and the author finally hands it over on a platter. He makes it easy for us to follow the past and current situations by presenting them in different chapters, date-labeled so we never lose track of which context we’re in. They are woven together bit by bit, with a looming sense of inevitability, until they converge in a dynamic climax.

Meanwhile, every chapter regardless of context ends on a cliff-hanger that compels us to keep reading.

Despite the plot pace, the narrative must slow down at intervals to set the scene. Readers need to understand where the action is occurring to appreciate the obstacles that pop up like viciously implanted spring-loaded hurdles. They are unexpected enough (who among us knows the hidden byways of gigantic airports?) to give things a nail-biting quality.

Our attention is kept focused on the question “What surprising thing will happen next?” versus worry about the hero’s survival. The fact this is a series lets us trust he will come out of it intact, though it’s certain to be tough going.

Given that much of the book is a pursuit, it’s gratifying to have a classic vehicle chase scene in the middle with a humorous twist: baggage carts on an active airfield! Yikes! Anyone who has flown commercial can visualize the chaos (and mess) this would create.

More amazing is how the hero can get away with it. Perhaps that item should be added to the bullet list above. So many law enforcement protagonists in fiction get away with stuff the rest of us would be jailed for.

In the main, Departure, along with the preceding volumes of this series (Takeoff and False Horizon), carries a flavor reminiscent of Dick Francis novels. While Francis never wrote a series, he did create an archetype hero and related every book to the same world: horse racing.

Seth Walker stories are all somehow related to aviation, and as a protagonist Seth is as sympathetic, unique, reliable, and admirable as Francis’s main characters always have been. Similarly, Joseph Reid’s prose is clean and crisp, and his characters, settings, and actions are adeptly and knowledgeably portrayed.

It’s thus easy to buy into these novels. Let us hope the author’s imagination continues to connect with dramas of our times and he keeps Seth a-running. If nothing else, next time you go through an airport and get on a jet, you’ll have your head up instead of down, imagining the possibilities . . .