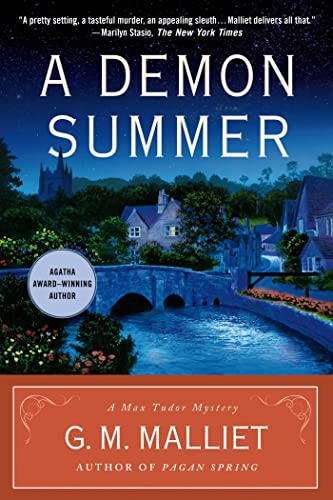 “A Demon Summer is a hard-to-put down mystery.”

Like its predecessors in this season-named series, A Demon Summer comes across as a straightforward English village mystery . . . beneath which bubbles subtly caustic humor and elbow-digging at human foibles. Malliet writes in a zing-without-sting style, with each character a caricature who is nevertheless well drawn and credible.

In real life it’s unlikely such a combination of colorful and eccentric types would reside in one village, which makes the story jangle. Believable rubs shoulders with fanciful. Profound truths and keen observations interweave through absurdities. Minor characters are described in startling, evocative images, e.g., a husband is “a large, tuna-headed man” and his wife has “hair . . . like a balled-up fist, the blond curls tightly corkscrewed to her head.”

Thankfully, the main character—Max Tudor, an Anglican priest and vicar of Nether Monkslip—is likeable and takes everything in stride, so we can stride along with him. (“Really, he thought, it was as if God were up there with a pea shooter sometimes, trying to get his attention by sending little hints and bits of information for Max to stitch together.”)

The primary action in this volume occurs outside the village in a nearby nunnery. While this might seem an unexpected place for a priest to be investigating murder, Max is a rather unexpected priest: formerly an operative in MI5 and currently engaged to a New Age/pagan spiritualist who is carrying his child.

At the nunnery Max meets a crop of colorful and eccentric guests and nuns, all of whom have something to do with the demise of arrogant Lord Lislelivet. Most of the suspects plunge into information-dumping conversation without warm-up, which contributes to the believable/unbelievable jangle.

We get to know a lot about the history and workings of the abbey, all of which is interesting but which raises the question, “What was normal? Max in his job sometimes had to distinguish true piety from mental illness, a surprisingly challenging task. One man’s vision, as one of his Oxford dons had liked to say, was another man’s brain tumor.”

And one situation is a red herring for another. The book itself is a red herring, in that the long, complex plot presented through multiple viewpoints leads to information overload, making things hard to follow. But the characters and milieu are compelling enough to keep the reader plugging along until everything makes sense in the end.

The resolution, however, feels a bit cheaty, because Max ends up with key information not given to the reader. We must wait until he spins it all out, which creates another one of those jangles. A humble vicar shouldn’t be demonstrating his mental superiority over others, should he? Though he acts appropriately humble, not every reader will buy it.

A final jangle is caused by the title, in that nothing particularly demonic happens. There’s only one scene, comparatively brief, that’s at all spooky; so like the cheaty resolution, the title feels forced, something to fit in with the series seasonal theme—Wicked Autumn, A Fatal Winter, Pagan Spring.

All that said, A Demon Summer is a hard-to-put down mystery. The question left behind is whether the four seasons will comprise the total of the series, or if the author will find a way to keep going around again.