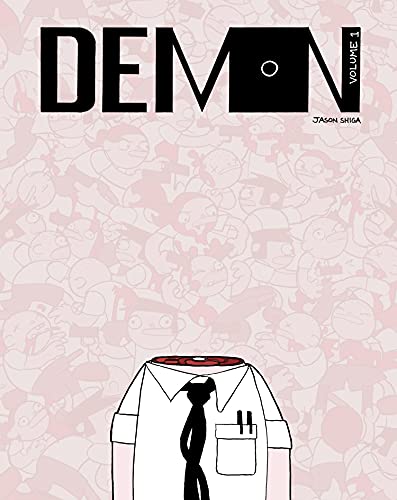 Well, that's one way to get the reader's attention. The other way is to write and illustrate one hell of a hilarious, sick, violent, disturbing, so simple every writer wished they thought of it, brilliant graphic novel.

For those not familiar with Jason Shiga's Demon series, it stars Jimmy Chee (a character he's used in other works) who is trying to kill himself. Repeatedly. Seriously. Over and over he tries to kill himself, but each time he is thwarted, waking up in his hotel room fully alive and getting more and more pissed about it.

Honestly. The many ways he tries to end his life become more inventive with each panel until you find yourself cringing with glee.

Then things get really strange, but to say more would spoil the reveal.

When it comes to those inventive panels, Shiga's illustration style is simple and to the point, which allows the absurdity and humor of his writing to come out. It is a less is more ethos and the story would probably suffer if each panel were filled with frivolous details.

Shiga makes sure the story is moved along with the illustrated information needed and nothing more. His skill is expressed in the composition and layout of the panels. And the eyes. Shiga is a master at making a simple circle with a dot in the center tell the reader everything they need to know about the character's emotions.

At 176 pages, with each page only partially filled by Shiga's sparse style, Demon, Volume 1 is a quick read. That could be the only legitimate negative of this book. It was too short. Yes, there are three more volumes on their way, but when the reader finishes the first volume they will want more right now. Now! Not a bad thing, but a little frustrating. It's good then that the next volume comes out in early 2017.

In short, if you are a fan of over the top violence mixed with some sharp humor and tight storytelling, then Demon, Volume 1 is the perfect graphic novel for you. Do not miss out on this excellent series. If you do, you'll want to kill yourself, and unlike Jimmy Chee, there's no coming back from that.