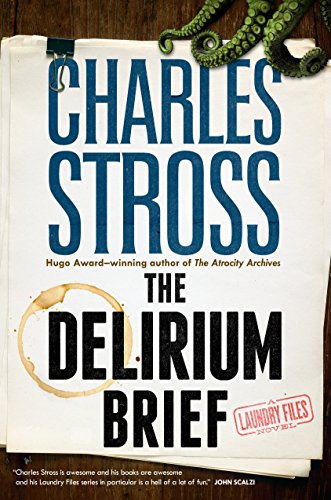 Bob Howard of Her Majesty’s Secret Occult Services, aka the Laundry section of the Special Operations Executive, is having a bad day—and it’s only going to get worse.

After a certain incident in Leeds, resulting in several operatives being infected with PHANG virus and an invasion of an elven force led by the heir of the Host of Air and Darkness, Bob finds himself not only replacing his predecessor, but also the possessor of an entity called the Eater of Souls, a fact responsible for the breakup of his marriage as well as various and sundry other unpleasantries.

Now Bob and associates are about to face their worse (best?) adversary yet, for the Reverend Raymond Schiller, whom they thought dead in another dimension, is back. This time he’s planning a takeover of the entire British Isles, starting with the Prime Minister.

“All around the UK, the lights are going out, and the chutes are falling across the doors of offices and remote installations . . . by Friday evening, the Laundry as an organization will cease to exist.”

It’s a complete shut down of the SOE, putting thousands of agents, supernatural entities, and other paranormal practitioners and liaisons out of business, and those in high positions are now fugitives.

Bob sums it up succinctly: “I’m homeless, jobless, on the run from the police who have good and sufficient reasons to drop me in a hole and throw away the key, separated from my wife, who may be—but almost certainly isn’t—pregnant (which is just pregnant enough to be really disturbing) one of my worse nightmares seems to be taking over the country from the top down, and I can’t sleep properly at night because of all the things I’ve done.

There’ s only one avenue open.

Those still at large have to fight back, and apparently the only way to do that is by forming a partnership with the lesser of two evils and bringing down the government. Their would-be ally is a man they’ve previously defeated, someone currently under lock and key in a secret section of the Tower of London. All he wants in return? Merely everything—“the respect and envy of my peers, the adulation of the masses, and the authority to enact my destiny.”

It’s a dirty job and a dubious alliance, but the only way to win—or is it really winning?

Though it starts off well, this novel is much less interesting than the earlier ones.

In any series, some explanation is necessary, of course, to bring new readers up to date and refresh the memories of previous ones. This book, however, contains too much expository about the Laundry, its agents, and enemies, while at the same time, there’s not enough about the “event in Leeds” or how certain members got to be the way they are. The reader simply muddles along accepting everything to get on with the plot. As to that, only the last third of the book contains most of the action, leading up to an ending that seems to do nothing more than point the way into another novel (or so we hope).

In spite of its Lovecraft references, as well as numerous mentions of movie, literature, and TV, and dry witticisms, there is conversely a plethora of U.K. slang, which may confuse the U.S. reader because they have to be inferred from context.

As a follower of the earlier novels, and one who greatly enjoyed those, this reader, unfortunately, found this one to be surprisingly tedious and disappointing.