Defined by Design: The Surprising Power of Hidden Gender, Age, and Body Bias in Everyday Products and Places 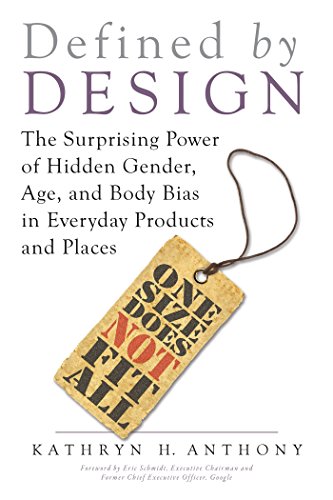 Defined by Design “spotlights how design shapes our lives, and how gender, age and body biases affect everything we feel, think and do. . . . it empowers you to become a more critical consumer and shows you stellar designs that work exceptionally well for the people who use them.”

Kathryn H. Anthony has a distinguished record in this field and over 100 publications on various aspects of designing for diversity. Her current book “connects with my own experience as a five foot two inch female with that of people everywhere who feel that the world is not always designed for you. You are not alone.”

While she insists that our society has become “increasingly diverse in gender, age and body size” it would be more reasonable to attribute the frequent mismatches and misfits to an increase in mass production; relatively few people, for example, have personal tailors anymore, or make their own clothes. And on the other hand new consumer markets have been defined such as tweens, preteens, teens, and young adults who were never formerly catered to.

Anthony addresses design in fashion, product design, and building design ending with a call to action to us all to become more intelligent consumers. Her most successful chapters are those where assumptions clearly influence design such as in the “taboo topic” of restrooms. She seems more comfortable dealing with gender than with other diversity issues.

Probably her least successful though most hilarious and crowd-pleasing is the chapter “Skin Tight: Clothing and Fashion Design.”

However, it seems too simplistic to attribute “four inch heels” (only?) on women’s shoes to some kind of gender bias unless one also includes the purchasers in this collusion. And does “toe cleavage” really refer to a situation “where the pinky toe gets severed off”?

There is more headline-grabbing stuff in this chapter on zippers, thongs, and gendered pocket placement, but it seems a stretch to include veiling of women in the middle east and elsewhere, and the flammable saris and grass-skirts in India and Papua New Guinea respectively, in a catalogue of gender-biased designs, without more in-depth cultural and historical analysis. And are only women subject to these cultural catastrophes? Probably male Trobriand islanders fall off coconut trees because of inadequate equipment, and male Indian farmers get gored by sacred white bulls who can be very indiscriminate.

Overall while there are a few of the “aha! moments” that we are promised, the author has cast her net too wide. There is far too much uneven data, seemingly randomly sourced and poorly organized, despite a plethora of subheadings in each chapter. The “facts” are often merely catalogued with insufficient reflection and analysis throughout.

Finally while we have many quotations and complaints from consumers about the unintelligent design they are obliged to live with, there is scant information from the designers as to why they do what they do. Are they only driven by ignorance and prejudice? Christian Louboutin, please stand up and tell us, What has made you a millionaire?