To Defeat the Few: The Luftwaffe's campaign to destroy RAF Fighter Command, August-September 1940 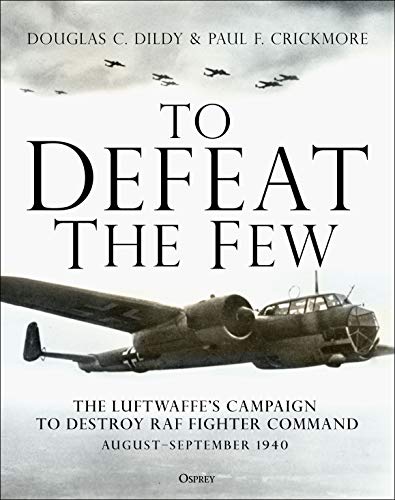 Nearly all the historiography of the Battle of Britain centers around the courage and fortitude of the “valiant few” British fighter pilots who turned back the German bombing campaign against the England in the summer of 1940.

This well researched and written volume provides a completely different take on this critical battle of World War II, offering the first operational analysis of the battle as a true air campaign from the perspective of the German Luftwaffe.

Presented as an evaluation of the world’s first attempt to attack and destroy an integrated air defense system and achieve air dominance over a theater of war as an operational goal, the narrative focuses on two critical factors that ultimately consigned the German effort to failure and prevented any possibility of a German invasion of England in 1940.

First, the Luftwaffe was created primarily to support the German Army as flying artillery and was neither structured or equipped for a strategic air campaign. Their bomber force was designed for close air support or short-range interdiction and their fighters also had very short ranges, intended for providing air superiority over advancing ground forces, not long-range bomber escort. More importantly, the Luftwaffe high command had no real doctrine for strategic bombing and had to continually improvise and re-assess the conduct of the campaign, creating a challenge to a unity of command and purpose.

The second challenge derived from this lack of strategic bombing doctrine. The German High Command determined the Luftwaffe only had about six weeks to defeat the Royal Air Force Fighter Command to meet the optimal invasion window of mid-September 1940.

Although the Germans improvised a sound plan to attack RAF bases, radar installations, and other military targets to prepare the invasion area and draw the RAF into combat, the authors noted that top Luftwaffe commanders warned it might take several months to achieve the desired results. In spite of these reservations, Hitler and the army commanders stuck to their unrealistic timetable, determined to force a peace on Britain before the onset of winter.

As the authors note in their analysis of post-war operational reports from both sides, the Luftwaffe actually achieved a better kill ratio in fighter combat with their English foes, but their bomber losses soon became unsustainable, and the focus of the air campaign shifted to indiscriminate bombing of English cities right as the Luftwaffe might have been on verge of a short-term victory.

As the Allies learned in their own strategic bombing campaign later in the war, only large numbers of dedicated long-range escort fighters could provide the ability to reduce but never completely destroy an opponent’s air defense. The Allies endured extremely heavy bomber losses before they relearned the hard lessons about the need for fighter escorts and endured extremely high casualties in both aircraft and aircrew to eventually defeat the Luftwaffe in a grueling two-year aerial battle across Europe.

This is a fascinating spin on this well-trod World War II campaign, providing a distinctive case study on the challenges of a strategic air campaign to gain air dominance over a tough and determined foe. Extremely well-illustrated and equipped with a variety of excellent maps to show the progress of the campaign, it provides the first genuine operational analysis of the battle from the German side of Britain’s “Finest Hour.”