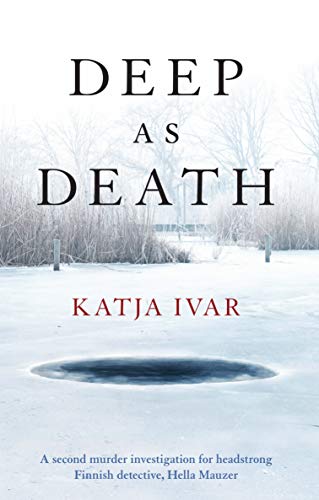 “a tangled web of history that slowly unravels as an ambitious chief inspector and a down-and-out private investigator, once colleagues, work against each other to discover the twisted reasoning behind the killer’s crimes.”

As the first female polissyster on the Helsinki police force, Hella Mauzer’s actions brought her to her superiors’ attention, and she was told “if you don’t learn to rein in your temper, you will end up being thrown out of the police.”

Hella did them one better. She left the Helsinki PD to become a private detective, if a slightly impecunious one.

At the moment, she’s trying to figure out how to get one hundred thousand marrkka to pay the fine levied by a judge in an assault case. She’s also just lost her live-in boyfriend, Steve Collins “the American DJ.” And she’s involuntarily gotten a new roommate—Anita, former police receptionist, now police officer, who comes “to visit” and stays.

Hella tells herself she’ll get over Steve. Eventually. She’ll find a new case and get the money for the fine. But Anita’s presence is an inconvenience and an intrusion though she can’t bring herself to tell the girl so.

She gets a new client soon enough—a high-end madam wanting to find out who killed one of her girls.

“‘She drowned,’the woman said, matter-of-factly. ‘She went down on the ice in West Harbour. The ice gave way and the police seem to think it was an accident.’”

“‘I want you to find who did this to her and I want that person to pay for what he did.’”

So Hella has a client, sent to her by Chief Inspector Jokela, her old boss at the Helsinki Homicide Squad.

At headquarters, Chief Inspector Erik Mustonen of the Homicide Squad is working the same case and is surprised to learn Jokela referred Klara to Hella.

“I raised my glass reluctantly. I didn’t expect to lose control of the investigation but I knew Mauzer, the way she operated. Maybe it was for the best.”

Things immediately become more complicated when an influential businessman’s son is involved in an auto accident and his “date” accuses him of tying her up with the intent of throwing her into a frozen lake. It isn’t the first time Ahti Virtanen has been in trouble but this time, Mustonen’s told to hush-up the case.

Mustonen is ambitious. He’s in line for a promotion. He also has a judgmental father-in-law and wife wanting to continue living in the style in which her parents raised her.

“I recommend you keep Ahti home for a while. Make sure there are no other unfortunate accidents. It could draw unwanted attention to what happened yesterday. Are we clear?”

When Klara Nylund is also killed, Hella, feeling she failed the woman, is determined to find her murderer as well as Nellie’s. Getting possession of Klara’s “business” notebook, she finds coded entries of all her clients, and narrows the suspects to one. Unfortunately, she knows that person very well.

Now Hella must make a choice. Continue with her investigation and possibly prove the man she still loves is a cold-blooded killer or abandon the case altogether.

The discovery of a similar death 18 years before only confuses the issue, and then Hella discovers Ahti Virtanen’s involvement. Were Steve and Ahti together in committing the crimes? Is Steve the “Harbour Killer” or is he being framed?

With Anita’s unwelcomed help, Hella struggles to solve the case before another death happens, discovering a police coverup involving some very important officials.

Then Anita disappears. Steve is arrested. And Hella discovers the truth.

While a homicide detective, Hella Mauzer was considered too independent and headstrong. On her own, she’s still a problem for the HPD, though now she has other problems weighing in. In this novel, more space is given to both Hella’s backstory and private life, as well as Mustonen’s, and how those elements influence their current situations.

The fact that the story is told from the first-person point of view of the two main characters, may confuse some readers if they don’t keep close watch on the clarifying chapter headings. Warning: Be alert.

Deep as Death reveals a tangled web of history that slowly unravels as an ambitious chief inspector and a down-and-out private investigator, once colleagues, work against each other to discover the twisted reasoning behind the killer’s crimes.

At the end, the revelation of the killer’s identity will be enough of a shock to send the reader re-checking chapters and asking how she could’ve missed certain significant passages, at the same time proving Katja Ivar has written a novel in which “the most dangerous lies are the ones we tell ourselves.”

The climax of the case suggests the way is left open for a future Hella Mauzer casefile—and if that happens, it would be a welcome addition to this series.