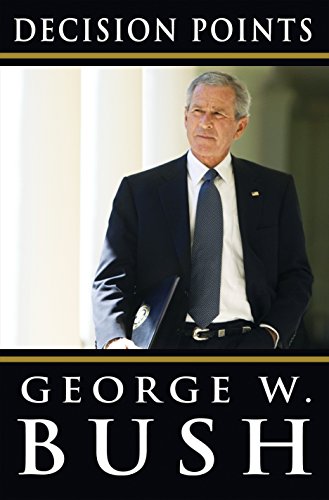 George W. Bush’s Decision Points is a memoir of his eight-year presidency. It is also an autobiographical look at some aspects of his earlier life, including family, courtship, governorship, his alcohol problem, school years, and military service.

The Bush Family has a long tradition of public service. George W. Bush and his brother Jeb served as governors of Texas and Florida, respectively. The Bush Family is one of only two American families that have both a father and son who served as president of the country. (The other being John Adams and his son, John Q.)

There is usefulness in describing the evolution of the man, as it explains in part the reasons for some of the decisions made during his presidency, (i.e., his mother’s miscarriage when George was 14; his solid grounding in Christianity, influencing his refusal to destroy embryos to create stem cells). It also exposes a more human, humorous, and family-oriented persona than was evident during his tenure as president.

Decision Points reads like a short history of the new millennium. Incorporated in one volume are the tumultuous events of the first eight years that began—ironically—as the world ushered in the dreaded “Y2K.” The much-feared collapse of our data collection and communication systems never manifested in ways predicted by doomsayers.

Instead, the new millennium produced its own Armageddon-like world. Starting with a contested election requiring recounts and a controversial Supreme Court ruling, the country then experienced its first encounter with bioterrorism in the form of Anthrax , the crises connected with 9/11, the subsequent wars in Iraq and Afghanistan, Hurricane Katrina and its aftermath, and the global financial crisis caused by the Wall Street’s mortgage-backed securities.

President Bush’s stated intent is to give the reader a sense of the most consequential decisions he made during his presidency. Those on the domestic side involve: 9/11, stem cells, education reform, the Medicare overhaul, an attempt at revitalizing Social Security, and launching faith-based initiatives. He devotes an entire chapter to Hurricane Katrina and later, another to the financial crisis. Excluded here are his domestic energy and conservation initiatives.

The foreign policy agenda dominated his entire eight-year tenure. There were the wars in Iraq and Afghanistan, the turbulent ebb and flow of progress toward building a lasting peace between Israel and the Palestinians, and the precarious consequences to other Middle Eastern relationships. Early on, President Bush launched an initiative in Africa to provide infrastructure to deal with the AIDS crisis. He also broadened development goals in African countries. The Civil Nuclear agreement with India and the Merida Initiative with Mexico to fight drugs are not included. President Bush devotes an extensive chapter to the Freedom Agenda highlighting relationships with leaders of established and fledgling democracies around the world.

In the final year of his presidency, the apocalyptic feel of 2001 returned. He describes the period between September and December of 2008 as “the most turbulent, decision-packed stretch since 2001.” George W. Bush faced a financial crisis unprecedented since the Great Depression. Two government agencies, Fannie Mae and Freddie Mac went into conservatorship, the government nationalized AIG, two investment banks failed. Two wars raged in Iraq and Afghanistan, Hurricane Ike hit Texas with damages in the billions, and then three American automakers sought assistance from the government.

All of this required drastic intervention in order to avert a national and ultimately a global economic disaster. He explains his decision to launch T.A.R.P. (the Troubled Asset Relief Program). The dilemma must be evaluated in terms of government intervening in the free market vs. the loss of millions of jobs, reduction in billions in tax revenues, and hundreds of billions in GDP loss . He describes this period as “ an ugly way to end a presidency,” but a leader does not choose his battles. While precarious, the financial situation was at least stable by January 2009

The intent of Decision Points, according to the author, is to present the facts and let the reader draw his/her own conclusions. Each chapter presents the issues, the goals, the individuals involved, and the outcomes—or at least the state of them at the end of his term. The book is clear and well-written. Chapters can be read selectively. There is enough tension and a generous supply of anecdotes to keep the reader’s attention. However, timelines are sometimes confusing since decisions and issues overlapped. Publication timing is purposeful, demonstrating the author’s intent to not influence the outcome of the November election by its release.

First Lady Laura’s role remained low in profile, but substantive. Her projects closely meshed with domestic and foreign agendas, and included literacy, microeconomic enterprises, reaching out to women in developing countries, and raising funds to restock libraries. She actively cultivated friendships and forged her own agenda around the world. She is in evidence in every chapter, but especially as a support and sounding board to her husband, just as she had been during the governorship in Texas.

Still, “perception is reality.” Facts cannot always alter the memory or the opinion of an individual. Etched into the mind of every citizen is his or her own version of those eight years. The former president himself states that history will be the true judge of his time in office. President Bush admits that some decisions were right, others wrong. He cites the example of Ronald Reagan, reviled while in office, yet ultimately credited with ending the Cold War. Ultimately, the question each person should ask is: “What would I have done in the same situation.” A serious reader’s perceptions could be altered, perhaps immediately, perhaps in reflection a year from now.

Regardless of one’s politics and/or opinions, the book should be judged on its own merit. It is strong, well written, and honest. The man whose “sound bytes” during television interviews were mostly terse one-sentence answers here comes across as much more of a communicator, network builder, and collaborator. He has left his mark on the world; and, yes, history will be his judge.