Death at the Manor (LILY ADLER MYSTERY, A) 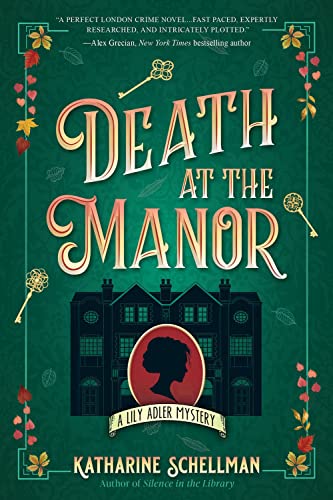 “What makes this an exceptionally good read is that Schellman does not distract or deviate from the premise of the story.”

Katharine Schellman hits another home run with her latest novel, Death at the Manor: A Lily Adler Mystery.

Schellman’s heroine, Mrs. Lily Adler, widowed at a very young age, visits her Aunt Eliza, expecting a quiet visit in the country away from the hubbub of Victorian London. Accompanied by her friends, Lord and Lady Carroway (Edward and Ofelia), quiet is something they do not encounter.

Hearing stories about a nearby manor that is haunted by a ghost, The Lady in Gray, Lily and Ofelia can hardly wait to visit the manor, where the owner, Thomas Wright, enjoys giving tours and expressing his belief in the ghost.

Lily is used to encountering murder, mayhem, and chaos, and this visit provides all three when, upon their arrival, they learn that Thomas’s mother was murdered the previous night by the ghost.

Schellman has created solid, three-dimensional characters throughout the story, from the elite to the servants to the townspeople. Each character is believable for their depth.

Lily and Ofelia are hard pressed to believe in ghosts and their investigation begins with the tenants of the manor—both upstairs and downstairs—and it does not take long for them to find suspects who fit the bill for the possible murderer.

Selina Wright, Thomas’s sister cannot contain her hysteria, while Thomas appears to be more in control of his emotions. Both seem to be at opposite ends of the spectrum in their grief. While everyone thinks the family is on the verge of bankruptcy, after some sly investigating by Lily and Ofelia it is determined that indeed the mother kept a tight rein on the family money, much to the chagrin of the family and staff, but they do not face destitution.

This leads the investigators to wonder, “had one of them finally grown fed up with their mother’s miserliness and decided to take control of their lives at last in the only way they could?” After all, more than one murder has been committed with money at its root.

Thomas is a womanizer and having a little tete-a-tete with one of the maids is not beyond him, but would that be a reason for committing murder?

And the other characters in the house? Mr. Mears, the old butler has little use for Mrs. Wright and how she treated her children; Isaiah the manservant and the maids, Alice and Etta, behave strangely regarding the death of their employer. There is little empathy from the staff.

And what about Clive, the gambler and money lender to whom Thomas is deeply in debt? A good cast of possible murderers.

Schellman is not beyond adding a little romance into Lily’s life, as she brings Matthew Spencer into the story just to spice it up. It’s refreshing to read about the possible budding romance in Victorian England, and yet there is a catch, and that is Captain Jack Hartley. Jack was a good friend of Lily’s deceased husband, and since his death, Jack keeps a watchful eye on Lily.

One senses romance in the air, but Schellman cleverly moves Jack back to his job captaining a ship bound to leave Portsmouth—thus making way for the entry of Matthew Spencer. By the end of the story, both men remain totally installed in Lily’s life.

It should be noted that Schellman is skilled at creating other situations that would have shocked Victorian England.

Schellman has done her research and paints clear, descriptive pictures of what life would have been like during Queen Victoria’s reign, especially as it relates to proper behaviors.

What makes this an exceptionally good read is that Schellman does not distract or deviate from the premise of the story. Every twist and turn is designed to move the story forward at a good pace, resulting in a satisfactory ending.

Schellman’s fans will enjoy this ride and will wait expectantly for the next installment of Lily Adler’s life.