Death of a Kingfisher 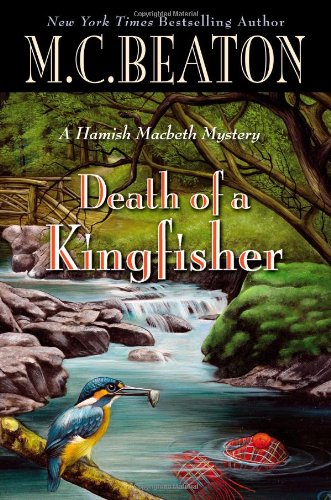 “Pick up a copy of Death of a Kingfisher, pour yourself a dram—or ‘murder a whiskey,’ as one police officer says—and enjoy.”

In this installment of her Hamish Macbeth series, M. C. Beaton notes the recession has spread to the good folks of the Scottish highlands. Local constable Macbeth has several villages to oversee and is impressed that one of them, Braikie, is trying to lure tourists by changing the prosaic name of Buchan’s Wood, a place of beauty and tranquility to the “The Fairy Glen.” The strategy works, and hordes of sightseers descend upon the little hamlet.

Macbeth usually works alone, but as a result of his running battle with police headquarters in Strathbane, he has been assigned Constable Dick Fraser, who is marking time until retirement. Hamish has nothing against laziness, as most of the time his beat is crime free, but when a case comes along, he, like a terrier, grabs and can’t let go. Hamish wouldn’t call his style of policing “broken windows”—the technique that when you take care of the small stuff like broken windows, you stop an escalation into more serious crime—but he knows that when you keep your ear to the ground, you are a better policeman.

He is as brilliant a crime solver as his hair is red, but if he too good, and calls much attention to himself, he’ll get promoted and have to leave his lovely home village of Lochdubh.

Hamish and Dick pay a wee social call to Mrs. Colchester, a Braikie newcomer and wealthy widow. She says at first she didn’t want the nearby glen overrun, but the head of the local tourist board, the beautiful and clever Mary Leinster, persuades her tourist that money is vital. It may have helped that Mrs. Colchester is superstitious and that Mary seems to possess second sight, the power to have visions about the future. In fact Mary warned Mrs. Colchester about her grandson Charles drowning in the glen. And guess what? Charles does wind up in the water, but is saved. He says he was pushed, but most think he slipped. Other incidents ensue, including the very ugly death of the title bird.

However, when one of the kids remarks to Hamish, “Is the old bat dead yet?”, it suggests he is less than grateful. Turns out the old bat is worth a bundle, and when she dies, the money would help her daughter and son-in-law keep the kids in the style to which they have become accustomed.

Hamish is not a true believer, but he doesn’t totally discount the concept of second sight. In past cases, when he needs information, he has visited Angus Macdonald, a local seer who accepts gifts—fresh salmon, cigars, whatever. As usual, Angus has some disconcerting insights, and as usual Hamish discounts the ones with which he disagrees.

Ms. Beaton has two main arrows in her quiver that stop her cozy series from being cutesy. First she has some of the most gruesome murders in all of fiction, and the bodies keep coming. Her second weapon is her cast of characters, both new (the sidekick Fraser has a propensity for winning TV games shows) and old.

Hamish will make romantic mistakes, his wildcat and blue-eyed dog will scare visitors, and the reader will learn something they didn’t know about Scotland. Here, fairies are not silvery Tinkerbell creatures, but a small-statured race of human beings pushed back into mountains by stronger peoples. Like all good folklore, there’s just enough commonsense involved in covering them to make one pause; then Ms. Beaton will have people leaving saucers of milk on the doorstep so the fairies pass up the house—harrumph material, right? Still, do you really want to be on their bad side if you can avoid it?

Pick up a copy of Death of a Kingfisher, pour yourself a dram—or “murder a whiskey,” as one police officer says—and enjoy.