Death of a Green-Eyed Monster (A Hamish Macbeth Mystery, 34) 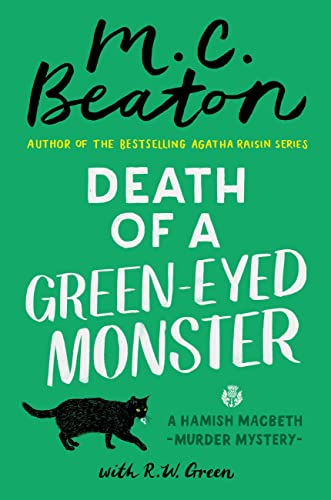 “this novel deals with human failings. Thanks to the gentle touch of R. W. Green, readers will look forward to spending more time in the future with Hamish as he protects the land and people he loves dearly.”

In M. C. Beaton’s Death of a Green-Eyed Monster, Scottish Police Sergeant Hamish MacBeth does not have a jealous bone in his tall, muscular, fiery redheaded body. In his 36th adventure in the fictional Scottish Highland town of Lochdubh, Hamish is surrounded by fiendish co-workers and mysterious criminals,who thrive on past resentments that ultimately prove to be motives for murder.

The story begins as Constable Dorothy McIver appears at the local police station as Hamish’s new assistant, and Hamish is immediately smitten. Falling in love seems to be a habit for him, with two broken engagements in his recent past. But Dorothy is the real deal. She’s beautiful, dedicated to their profession, a true soul mate to Hamish—and she is equally smitten with him. Her past remains a mystery, but Hamish agrees to leave the past behind and concentrate on their future together when he pops the question on a picturesque hillside.

Mere moments after their engagement, Hamish and Dorothy are drawn into the murder investigation of the gangland assassination of a Glaswegian underworld henchman. He’s found at a local gas station inside a bright yellow Mustang with a bullet in his skull. His gang, the MacGregors, is notorious for having their fingers in organized crime in Glasgow, and this murder suggests they are expanding into Hamish’s patch of lochs, mountains, castles, and farms in the northernmost part of the Scottish mainland.

When the big boys are dispatched to investigate the murder’s connection to international gang warfare, Hamish and Dorothy are thrown off the case. Their superior and an old buddy of Hamish’s, Jimmy Anderson, knows Hamish won’t accede to the dismissal, and he warns them to be careful, otherwise the two lovebirds won’t be able to work together—ever.

As Hamish defies the warning, he introduces Dorothy to his land of clan history and the ancient folklore of mermaids, lairds, and devils, taking the readers along to uncover clues in Glasgow, Edinburgh, Inverness, and Dundee. Along with Dorothy, the readers succumb to Hamish’s love of Scotland, and appreciate why he chooses to remain in the Sutherland District rather than beat the mean streets of Glasgow.

Sprinkle in a colorful cast of former local policeman who are now chefs, bakers, and security officers, and MacBeth’s relatives in every city and hamlet, and the reader discovers that Hamish has eyes everywhere. His exuberant sidekicks of Lugs, his mutt, and Sonsie, his big wild cat, are on hand to add levity to the gangland style murder, as are the meddling Currie twins, American James Bland and Hamish’s former fiancées, accountant Priscilla and television reporter Elspeth. Since major plot points occur at the Tommel Castle Hotel, there is a castle full of characters and suspects in this tale as twisty as Sutherland’s tourist route along the North Coast Five Hundred highway.

Hamish’s personal history also includes a dastardly superior officer named Detective Chief Inspector Blair, who while banished to Glasgow, has returned to supervise the investigation. He is a deranged, vengeful, and spiteful man, who will stop at nothing to torment Hamish, ruin his sterling reputation, and impede his impending nuptials. But will the evil Blair succeed?

This is R. W. Green’s first outings as the successor to Marion Beaton’s Hamish MacBeth series, and he captures the charm of “a hero with endearing contradictions—a hard worker who is prone to skiving off when the mood takes him; a law-abiding police officer who might poach a few salmon or a deer from time to time; and an honest cop who deal with people fairly but is also capable of bribing a witness or planting evidence to get his man.” In Death of a Green-Eyed Monster, Hamish MacBeth is a man who is blinded by love as he contends with the twin demons of jealousy and revenge. Will the demons win out, or will Hamish finally make it to the altar with his beloved Dorothy?

As in the previous MacBeth books, this novel deals with human failings. Thanks to the gentle touch of R. W. Green, readers will look forward to spending more time in the future with Hamish as he protects the land and people he loves dearly.