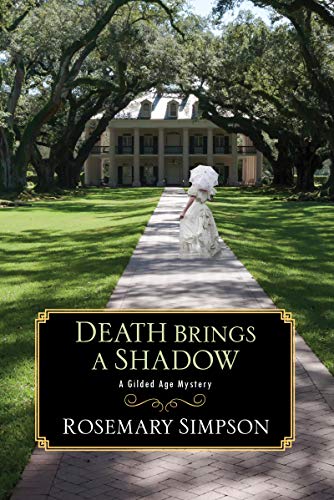 “Simpson’s depiction of the south after the Civil War is chilling, with lynchings, beatings, voodoo, and hidden secrets sprinkled throughout that keep us turning the pages.”

Prudence MacKenzie and her business partner, Geoffrey Hunter, look forward to a relaxing sail from New York to Bradford Island, Georgia, where Prudence’s best friend, Eleanor Dickson, is to be married. Prudence has been asked to be the maid of honor, an invitation she accepts without even a second thought. Then the unimaginable happens: Eleanor disappears just before the wedding and is found dead—drowned in one of the swamps on the island.

That is how Rosemary Simpson hooks her reader in her new book, Death Brings a Shadow, and she doesn’t let go until the very end of the story.

It is just three decades after the end of the Civil War, and Prudence has no idea what she is getting into when she and Geoffrey arrive, and the cultural differences between the north and the south stun her. Geoffrey, born and raised in South Carolina, is reluctant to educate her to the way of the world there—a world that has not yet adapted to the results of the war and the impact it has on everyone south of the Mason Dixon Line.

She is unwilling to accept that Eleanor’s death was an accident as everyone thinks, and as she and Geoffrey dig into the event, it becomes apparent that murder is the only real answer.

Eleanor’s fiancé, Teddy Bennett, is bereft, but the rest of his family—Elijah, his father; Lawrence, his brother; and his two spinster sisters, Aurora Lee and Maggie Jane, are not disappointed at all. The family did not do well financially after the war, and although Eleanor would have brought great wealth with her to the marriage, there is more hidden in the island swamp than just alligators and snakes.

The sisters, raised in the true south where women were kept away from anything that even began to smell bad, are unaware of anything other than the trousseau Eleanor left behind. They are determined to obtain it for themselves at all costs.

Elijah, at first thrilled that his son is marrying into such a wealthy family—even if they are Yankees—upon first meeting Eleanor quickly turns his thrill into anger, refusing to accept her. Teddy’s brother Lawrence feels remorse at the loss of the wealth, but not Eleanor.

As Prudence and Geoffrey turn over more rocks, with stale secrets hidden under them, Eleanor’s parents plan to move back to New York as quickly as they can, cutting short the time Prudence has to find the truth.

Prudence, an independent woman from the north, quickly feels the sting of southern “gentility.” The Bennett plantation, Wildacre, is rife with secrets held over from before the war, and even three decades later it does not appear that those secrets will ever open up.

The more Prudence digs into the Bennett family, the darker its history becomes. The ex-slaves that remain with the family are hardly “ex” at all. Her first encounter with Aunt Jessa, an elderly African woman who practices white voodoo, earns Prudence a protective bracelet that she is told never to remove.

On the other side is Queen Lula, a practitioner of black magic, and yet the two voodoo women work together to protect those around them.

As she continues to dig, Prudence happens to see a young woman who she mistakes as either Eleanor or her ghostly apparition. It is then that she discovers the secret of white slave owners, at their own choosing, impregnating their slaves.

With all of her worldly knowledge, Prudence is horrified to learn how often this occurred. And yet, how could this young woman look so much like Eleanor? Upon meeting Minta, Prudence realizes her mistake, and yet this young woman with a black mother and white father shows very few traces of her African heritage.

Simpson proceeds to weave the strands of southern history and all its misgivings into a strong web of deceit and greed. The relationship between Prudence and Geoffrey begins to unravel as he tries to convince her to let Eleanor’s death be, even as the web of the south begins to tighten around the two families with disastrous results.

Simpson’s writing style is strong as she develops believable characters, and beautiful, albeit dark, locations. The tension mounts as too many truths begin to surface and the twists and turns she builds into the story tighten right to the very end.

Simpson resolves the story well, even though the truth of history will never prove satisfying. Her depiction of the south after the Civil War is chilling, with lynchings, beatings, voodoo, and hidden secrets sprinkled throughout that keep us turning the pages.