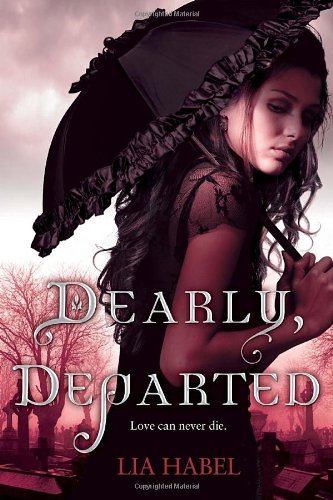 “Dearly, Departed is a lush, roaming story, but the threads all come together masterfully at the end, with nothing left dangling. And it’s addictive. The deeper into the book you read, the more involving it becomes, flowing so smoothly that hours fly by. It’s a clean, well plotted, and intricate first novel, and with this debut, Lia Habel is already someone to keep an eye on. The next installment in the series can’t come fast enough.”

Dearly, Departed is a love story, and it’s a sweet and charming one.

It’s also pretty refreshingly straightforward. The complications all come from the world around them.

The backstory of Lia Habel’s first book in a series has all the natural disasters scientists have ever said we’re due for: global warming, storms, nuclear war, earthquakes, even the eruption of Yellowstone. The result is a drastic lowering of world population, a migration of the survivors out of old habits and countries, and a settling and rebuilding in South America.

The new culture is divided between the New Victorians—who see Victorian social constructs and mores as a good way to strengthen their society while allowing some control of the rebuilding of technology, and the Punks who want more freedom and less of the technology that has caused at least some of the problems with the old world.

In this framework, New Victorian schoolgirl Nora Dearly is grappling with the loss of her father. When someone tries to kidnap her, someone who seems to have some illness that makes the victims look dead, she is rescued by a branch of the military that her father had been working for—and finds out that the illness creates zombies, the Departed of the title.

From there, the story expands from a strange steampunk-cyberpunk Victorian orphan drama to something much bigger. There is a conspiracy, a double agent, a war, and an outbreak that devastates the city she lives in. Nora Dearly and her new friends fight all of it in some very exciting scenes in this zombie post-apocalyptic novel.

While starting somewhat slowly, Dearly, Departed’s beginning lays out all of the groundwork required for the emotional payoff of the climax. There are scenes rendered so clearly and viscerally that they are equal to those in any of the great zombie movies.

The comparison to other steampunk zombie post apocalypse novel Boneshaker by Cherie Priest and similarly teen-driven paranormal romances like Twilight is unavoidable, but Dearly, Departed has its own unique voice, by far. The zombies are much more relevant to the plot than they are in Boneshaker, and the romance is rich and involving while still maintaining Nora’s own personality and not subsuming her in the context of the love story. She has other things to worry about, too.

Perhaps because the story is told from a number of other points of view than just Nora’s, the book manages to maintain a balance that would have been easy to lose in so complex a story. We get to see the action unfold through the eyes of Nora, her zombie-soldier beau Bram, her best friend Pamela who knows next to nothing about what is happening and gives us the best of the zombie invasion scenes, her father Victor who is working on a cure, and even the zombie-hating Wolfe. The effect is like switching cameras in a drama; we get to see the same event unfolding from several locations and angles, giving us a much more rounded view of the world and the events in it than the usual closely-locked first-person narrative would allow.

Nora and her friends and enemies are all distinct, vibrant, realistic characters. The story is concerned not just with the action, but with what the fallout of it means to the people involved, and in fact, what the fallout of the whole situation means. It asks the Big Questions—What does it mean to be human? Is love worth its inevitable loss? How far will or should people go for each other?—in organic and natural ways that make the story more than just an action romance. And there is a lingering sense of perpetual loss that suits the Victorian conceit as well as the addition of further books.

Dearly, Departed is a lush, roaming story, but the threads all come together masterfully at the end, with nothing left dangling. And it’s addictive. The deeper into the book you read, the more involving it becomes, flowing so smoothly that hours fly by. It’s a clean, well plotted, and intricate first novel, and with this debut, Lia Habel is already someone to keep an eye on. The next installment in the series can’t come fast enough.