Dearest Lenny: Letters from Japan and the Making of the World Maestro 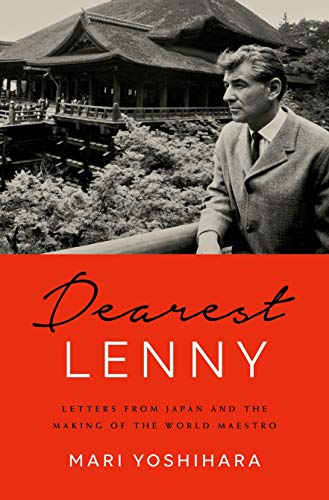 Ask a musician to choose one American classical music celebrity and it’s likely it would be Leonard Bernstein. Composer, conductor, author, educator, and pianist¾Bernstein was successful in all of these areas. In Dearest Lenny: Letters from Japan and the Making of the World Maestro, readers are treated to two great writers writing about their subject. Mari Yoshihara writes about Bernstein the conductor, and Kunihiko Hashimoto writes about his love for Bernstein the man.

Yoshihara presents a beautifully written review of Bernstein’s life through letters written to him from both Hashimoto and a woman who was perhaps his most loyal fan, Kazuko Amano. Amano’s first letter to Lenny was written in 1947. She was not yet 20 years old, Bernstein not quite 30. Through the course of her correspondence the entirety of her life is shown through the lens of her admiration for Bernstein: her marriage, the birth of her children, her husband’s death, her late life career in publishing.

Yoshihara structures her book in two ways: through Bernstein’s correspondence with two people who loved him and through the seminal events of his lifetime. This structure makes the book compulsively readable. Amano’s first letter to him was written only two years after the conclusion of World War II. The reader is led through the United States’ changing relationship with Japan, the establishment of Israel, the turbulence of the 1960s, the massacre at Tiananmen Square, changing social attitudes toward homosexuality, and the emergence of AIDS.

Lenny devoted himself to many of these causes, although curiously for a gay man he maintained a public distance from the gay community. In a message to an AIDS benefit he was unable to attend he wrote that AIDS was “a drastically urgent problem for communities like yours . . .” and that the politicization of the disease was “the new lethal weapon against the sexual liberation for which you have struggled so long.” He chooses “yours” and “you” instead of “ours” and “we.”

Yoshihara includes one letter from his wife, Felicia Montealegre, in which she addresses his guilt over his sexuality. “You are a homosexual and may never change . . . (I happen to love you very much¾this may be a disease and if it is what better cure?)” It was only three years before Bernstein’s death that homosexuality was no longer officially considered a mental disorder in the Diagnostic and Statistical Manual.

In his private life however, he certainly embraced himself as a gay man. The letters from Kuni to Lenny display a deep love between these two men. Though theirs was not exclusive, the 11-year relationship lasted until Bernstein’s death in 1990. Yoshihara shows how loving Bernstein changed Kuni.

Kunihiko Hashimoto was a 26-year-old insurance worker in Tokyo when he and Lenny first met. Kuni later became an actor and writer, and worked as a translator and business manager for Bernstein. Though English is not his first language, he expresses his love for Lenny in a style which, from his very first letter, reads as poetry: “Around the sun, beautiful white clouds were whirling and streamed like they were dancing with happiness and joyfulness. It was like a great symphony. And the sun was very beautiful red with mystery, fantasy, tenderness, and love. I believed that you arranged and conducted the great, fantastic, symphonic view. And in that view at that moment, I felt our future with happiness.”

Even phrases that are likely a result of Kuni’s unfamiliarity with English sound charming and full of his love for Lenny. Because his letters from Tokyo to New York would take 10 days, Kuni writes “Oh, I have to talk to you in the future, don’t I? But in the future, my mind will surely be the same.” Later in their relationship, he references their many separations: “When I came back from Munich to Tokyo, for 18 hours on the airplane I remembered every moment which we had in Munich. And while remembering, I tried to prepare for the life without you. But this time, suddenly the last day came, and you left me in Japan. Without any preparation, my lonely life has come. It is like a sandglass after sands have fallen down, and I am an empty sandglass now. . . . I wonder when I can turn the sandglass upside down.”

Kuni had fallen in love with a man but the man was also an industry. Lenny employed secretaries, housekeepers, copyists, publishers, and numerous assistants. This is another aspect of Bernstein that Yoshihara refers to her in her subtitle: the Making of the World Maestro. It was Lenny the performing maestro with whom both Hashimoto and Amano fell in love. Amano best captures the shift from worshipping conductor rather than composer when she writes to Lenny following one of his performances of a Mahler symphony: “I felt something like a confession of all your feelings about LIFE and LOVE and DEATH, about the sadness and depth of our human lives. For me it was a real PRAYER far beyond the so-called ‘religion,’ a sincere and touching CONFESSION of all your sorrows and desires and everything! . . . Thank you so much for what you gave us!”