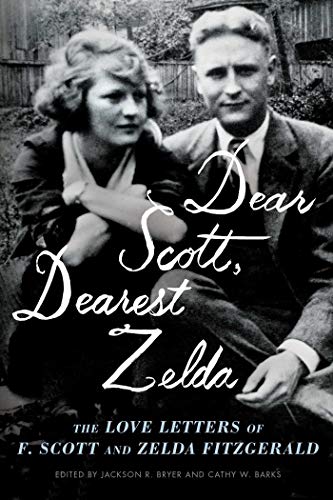 “readers will appreciate the elegance of both writers here, and will, moreover, relish the couple’s unending devotion to each other.”

Divided into four sections, the letters capture the couple’s unending connection and bond. While it isn’t frequently that one sets out to read a book of letters since their attraction is unique and particular, their content specific, the appeal of letters between F. Scott and Zelda Fitzgerald is greater than many other figures, and the reward of reading these letters outshines a simple scholarly appeal.

The opening section finds the couple in a frenzy of romantic excitement as the two make marriage plans with Zelda rooted to her hometown in Alabama and F. Scott establishing himself as a writer in New York City. Zelda plays the coquettish lover, writing “Don’t you think I was made for you? I feel like you had me ordered—and I was delivered to you—to be worn,” just after she pens, “An old flame from the Stone Ages is calling to-night,” in a move perhaps meant to unsettle F. Scott in New York.

In contrast, F. Scott’s correspondence are brief three-to-five-line telegrams that update Zelda on story publications, movie scripts, and the eventual publication of This Side of Paradise. The editors note that while F. Scott kept all of Zelda’s letters, Zelda failed to preserve Scott’s. Thus a certain one-sided conversation exists here and throughout Dear Scott, Dearest Zelda. In this opening section, Zelda writes 28 long letters against F. Scott’s 20 telegrams. A later section titled “First Breakdown” occupies almost 65 pages with only one letter of F. Scott’s. Certainly, as a collection purporting to contain the correspondence of both Zelda and F. Scott, it would be remiss not to point out that deficiency.

Part II entails, as the title suggests, “The Years Together,” and is a mere few pages of narrative with two extant letters. Obviously, the couple had no need to write one another while living together, so the section serves to close a necessary gap. Sadly, the reader has no insight into what is likely the pinnacle of the couple’s happiness. Instead, this era is bypassed and quickly followed by the final sections of separation and struggle.

The longest section of the book, “Breaking Down,” is subdivided into three additional sections that follow Zelda’s breakdowns and hospitalizations. Her first institutionalization in Switzerland marks the turning point in their marriage, for thereafter the couple are rarely together. It does, however, provide a copious amount of letters as writing to one another formed their primary means of connection—an imagined teether that maintained their bond.

Zelda is quite open about her mental condition, writing, “Please help me. Every day more of me dies with this bitter and incessant beating I’m taking.” She even challenges F. Scott to be more engaged, writing in one letter, “Your letters are just non-committal phrases that you might write to Scottie [their daughter] and they do not help to unravel the infinite psychological mess that I’m floundering about in.” For Zelda and for the reader, F. Scott is largely absent from much of this as so few of his letters to Zelda exist. What emerges then is Zelda: her unhappiness, her obsession with dancing, and her connection with nature which will be a constant trope throughout her correspondence.

Zelda’s observations of nature in this work substitute almost as projections of her inner self. On a particularly low day and missing F. Scott, she writes, “The woods here are molten and shivered into golden splinters by the autumn sun.” On another day, Zelda observes, “The air blows warm and soft as the swirl of a painter’s brush outside and the dry leaves sink in a slow nocturne.”

In a much later letter written during her third breakdown when she is recovering in Asheville, NC, she again turns to nature: “This attenuate land loses itself in the blue autumnal haze of withdrawing horizons; and a thin and concise sun fills the heavens to perhaps a more cerebral purpose.” Zelda is quoted at length above to make two key points: (1) she dominates the work and (2) her writing with its pace, its thoughtfulness, its poetry is a joy to read.

As the couple’s life becomes more difficult, their decline is marked by a more fervent concern with money. F. Scott details expenses, always trying to send a few dollars to Zelda while Zelda responds, writing in almost every letter, “Thanks for the money,” “Thanks for the money, again,” “The money arrived.” In the last letters, F. Scott dissuades Zelda from selling a watch he paid $600 for but he believes will only earn $20 pawned and apologizes for only being able to provide Zelda with a “small present” for Christmas that year. Perhaps in uncanny clairvoyance, Zelda writes in 1918 before they are married, “We will just have to die together when we’re thirty,” and in another letter, “We will die together—I know.” F. Scott died in 1940 at 44; Zelda perished in an institutional fire in Asheville in 1948 at 48. Indeed, it is a heartbreaking conclusion.

The editors frame Dear Scott, Dearest Zelda with supportive biographical material and fill in other details by providing helpful footnotes, making the work a quasi-biography. Even a reader naïve to the Fitzgeralds’ lives will glean much about them here. All readers will appreciate the elegance of both writers here, and will, moreover, relish the couple’s unending devotion to each other.