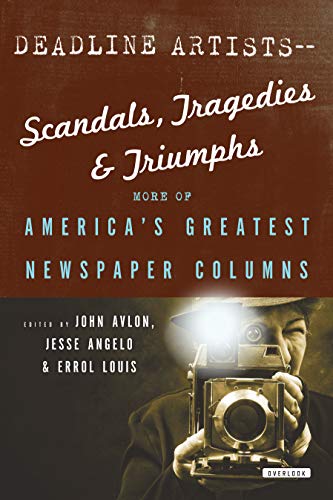 “. . . an excellent book for those interested in the journalism greats, both past and reasonably contemporary. It should be required reading for journalism majors.”

In a world of perishable correspondence, I fear we will lose precious writings to the Internet.

Some would argue that the electronic world allows us to save writing in perpetuity unlike in the physical world. I hope so. Then we can accumulate such writings as we have in this journalistic candy store of Deadline Artists: Scandals, Tragedies and Triumphs—More of America’s Greatest Newspaper Columns.

All are icons of the great world of newspaper columnists that brought a rich reflection on the sign of the times.

The editors of the book—John Avlon, Jesse Angelo, and Errol Louis—all bring years of journalistic experience and talent to the table.

The chapters are divided in the sections: Scandals, Tragedies, and Triumphs— although it was difficult to discern the decisions of which piece should categorize Triumphs.

Samples of each are indeed compelling. The articles span the years as early as Jack London’s account of the San Francisco earthquake in 1906, “The Story of an Eyewitness,” for Collier’s to the 2011 Bret Stephens eulogy on his father in “A Lesson Before Dying” for the Wall Street Journal in December 2011.

“She stood gazing steadfastly at her executions, when the priest, the nuns, and her lawyer stepped away from her.”

There are tragedies as horrific in “There Is No News from Auschwitz” by A. M. Rosenthal for the New York Times in 1958:

“And so there is no news to report about Auschwitz. There is merely the compulsion to write something about it, a compulsion that grows out of a restless feeling that to have visited Auschwitz and then turned away without having said or written anything would somehow be a most grievous act of discourtesy to those who died here.”

There are uplifting articles that bear witness to triumph over diversity. Mike Royko wrote about the first time Jackie Robinson stepped onto Wrigley in “Jackie’s Debut” for the Chicago Sun-Times in 1972. Royko wrote this reminiscence on the day of Jackie Robinson’s death. He remembered discussion back then that a black baseball player would ruin baseball forever.

“When Robinson stepped into the batter’s box, it was as if someone had flicked a switch. The place went silent.

“He swung at the first pitch and they erupted as if he had knocked it over the wall. But it was only a high foul that dropped into the box seats. I remember thinking it was strange that a foul make that many people happy.”

Where would journalism be without the cutting edge, literary knife-wielding humor of Molly Ivins. Ivins had a way of tapping out laser sharp awareness with clarity unlike any other writer’s.

When funding for AIDS was brought to the ballot box in Texas, the opposition became obstreperous. Ivins had her say in her inimitable style in “Ignorance Epidemic During AIDS Crisis” for the Forth Worth Star-Telegram in 1992:

“What is this? Dog days of August? Full Moon? Stars in strange alignment? We all know there are still slope-browed, egg-sucking ridge runners out in the hills who believe that only homosexuals get AIDS and it serves them right.”

Deadline Artists is an excellent book for those interested in the journalism greats, both past and reasonably contemporary. It should be required reading for journalism majors.