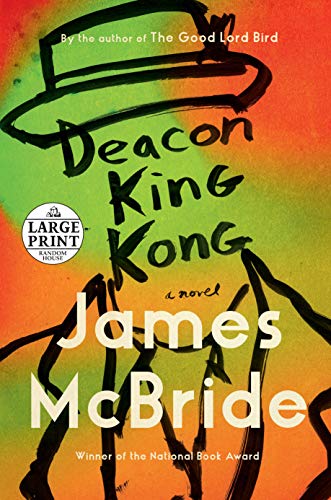 “James McBride fans will add Deacon King Kong to his list of successes. As is his strength, McBride brings characters to life through humor, pain, anger, and poignancy as few authors can.”

McBride’s primary setting is the Cause housing project in New York where his characters are family—some truly related—most not, but family, nevertheless. And as with most families, the angst rises and falls, but the defenses and support never waver.

His hero, Cuffy Lambkin, known as Sportcoat and at times also as Deacon King Kong, is an elderly man, a widower. and a drunk, who seldom remembers what he does from one moment to the next. In his younger years he coached the young male residents of Cause in baseball, where he experienced initial success with one young man in particular, Deems Clemens.

But in spite of his success on the field, Deems soon falls victim to the temptation of fast money through selling drugs, and Sportcoat’s dreams of success with Deems disappear. He watches as the years pass by and Deem’s reputation grows as the best drug dealer the mob has in the projects.

One day Sportcoat takes his gun, approaches Deems, and shoots him in front of witnesses. Deems does not lose his life, instead he loses an ear! But the deed is done, and the story unfolds with McBride’s characters marching in step.

The mob wants Sportcoat finished—after all, they can’t have their best pusher attacked by an old drunk. The police want to know who committed this crime, why, and bring him to justice. And the residents of the Cause see no reason to step up and aid either entity.

Sportcoat’s best friend, Hot Sausage (aka Sausage), believes it is in Sportcoat’s best interest to leave, to hide, to avoid getting caught by either the mob or the police. But Sportcoat has no idea what Sausage is talking about. He knows nothing about a shooting. He only knows that he loves Sausage’s drink creation: King Kong—the bane of his existence.

As Deems begins his recovery, he takes no action against his old coach, and his life begins to change. He is more careful about who he sells his drugs to, a decision that does not sit will with his mob boss, Moon Bunch. Also, Bunch has become aware that Deems might be considering moving his business to a different boss, Joe Peck. Not a good idea for Bunch, not a good idea for Deems.

Add into this mix Tom Elefante (the Elephant), a low-level mobster who wants out of the business, and destiny calls when an old friend (“The Governor”) of his father’s (from whom Tom inherited his “business”), approaches him with a deal. Find an artifact that Tom’s father held for The Governor, and it is worth a small fortune. The Governor is dying and no longer wants it but will help Elephant sell it and get out of the business with money to spare.

And yet another fly in the ointment, sergeant Potts Mullen, assigned to find who shot Deems and bring him to justice. As his search commences, he encounters Sister Gee, wife of the pastor of Five Ends Baptist Church at the Cause. Sister Gee knows Sportcoat shot Deems, but she would no more give him up than she would leave the church. A spark appears and their relationship begins.

There are moments in McBride’s story that are drop dead funny: when Sportcoat shoots Deems, then attempts resuscitation, with what appears to witnesses to be humping the victim. Then there is Earl, the hit man hired by Bunch to send a message to the residents of the projects by doing away with Sportcoat, but Earl couldn’t find the side of the barn, much less hit it! Two scenes that will drive the reader to laugh out loud each time they are brought up.

While the residents of the Cause, the police searching for the shooter, the mob boss aiming to make a point, and the lower level mobster trying to retire, all seem initially unrelated—McBride does an amazing job of bringing everything together, tied up in a neat little package, with some unusual twists along the way.

With each chapter, a new character is introduced—Bum-Bum, Miss Izi, Harold Dean, Dominic the Haitian Sensation, Soup, and more; and each brings his or her own charm to the story as McBride knits the characters into play.

McBride also brings a reality to his story, as he describes the plight of the various characters as they struggle, each with his or her own devils, to simply exist day-by-day as they march toward a questionable future. They live with simple pleasures like a mysterious delivery of cheese every week that is distributed to the Cause residents; and they cope with the inevitable pain and death they can’t avoid or escape.

James McBride fans will add Deacon King Kong to his list of successes. As is his strength, McBride brings characters to life through humor, pain, anger, and poignancy as few authors can.

This is a book not to be overlooked.