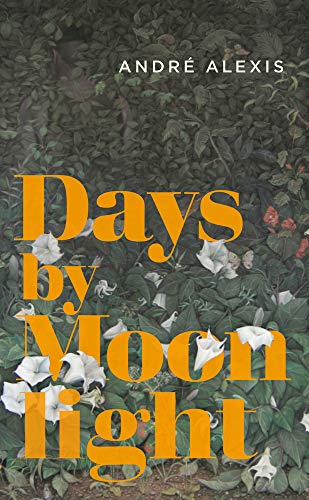 “Days by Moonlight is a trip down the rabbit hole to a Wonderland for adults, where the real and the unreal walk hand in hand, and it’s difficult to separate the two.”

When young botanist Alfred Homer is invited by his parents’ friend, Professor Morgan Bruno, to accompany him on a trip through Canada, he’s unaware he’s about to go on a journey of self-discovery.

Bruno, an admirer of the poet John Skennen, wants to travel through that part of the country where Skennen lived, and see the places inspiring him to write his most famous poetry as well as speak to the people who knew him.

“He stopped publishing twenty years ago,” Bruno said. “No one’s seen or heard from him since. Can you imagine? The talent of an angel. Gone! Like that!”

Ignorant of either Skennen or his work, Alfred has several reasons for accepting Bruno’s invitation: It’s the anniversary of his parents’ deaths, his wife has just abandoned him, and Bruno plans to visit Feversham, a town where Alfred has heard a rare plant with amazing healing properly grows. His contribution to this adventure will be to carry the professor’s luggage and transcribe his notes. In return, Bruno will pay his meals and fare.

Their journey will be an experience neither man will forget, an innocent blundering through a Canada that is like nothing either has before seen.

They will visit various towns frequented by Skennen: Coulson’s Hill, where the Indigenous Parade is held, allowing the native population to pay back their invaders.

“What if,” the councilor said, “we had a parade and allowed the indigenous people to thrown tomatoes—or rotten fruit—at the country’s Founding Fathers?”

The town of Nobleton where Pioneer Days are celebrated by seeing who can build a house the fastest, then burn it down, so next year another contest can be held to see who can build a new one faster.

“It’s barbaric,” said Mr. Flynn. “But everyone’s got such good intentions that no one minds.”

The town where Skennen met Carson Michaels, a woman who would only love a man who knew what made her cry.

And then there’s the beautiful Clare.

“I’m cursed,” she answered. “I’m a lycanthrope but I only turn into a wolf when men desire me. You’re so kind, Alfred. I’m certain you’ve been sent to help me.”

“That would be unfortunate,” she said.

They will visit John Skennen’s relatives, a group as bizarre as any of Lewis Carroll’s characters.

“It seemed she wanted to hear Professor Bruno talk about her nephew, but then she pulled out an umbrella and hit him with it.

They will learn that Skennen wasn’t always his name and discover the fate of the man who once was John Skennen.

And they will come away enlightened, especially Alfred, who finds unknown powers within himself, and a deeper appreciation for the life to which he returns.

“Not for the first time, I wondered if home was home or just another part of the journey and I remember the words of a famous physicist: ‘There is no home but in travel.’”

Days by Moonlight is a trip down the rabbit hole to a Wonderland for adults, where the real and the unreal walk hand in hand, and it’s difficult to separate the two. Like that story, it makes sense while being read. It’s only afterward as the reader tries to explain it to others that difficulties arise.

Best only to say, “You should have been there.”

With characters as peculiar and unconventional as they are likable, and events seemingly sane while they happen, but only afterward are realized bizarre, the entire story has the quality of a complicated but harmless dream. Adding to add to that ethereal quality are Alfred’s drawing of the plants and herbs he sees along the way, including the rare plant called “five fingers,” one of the reasons he goes on the journey.

This novel is a delight in prose as well as a philosophical complexity, a detour from reality into places where everything looks familiar, but in a certain light, becomes new and strange, where, at a certain time of day, “the traveler can’t tell the difference between dog and wolf.”