David Lynch: Someone Is in My House 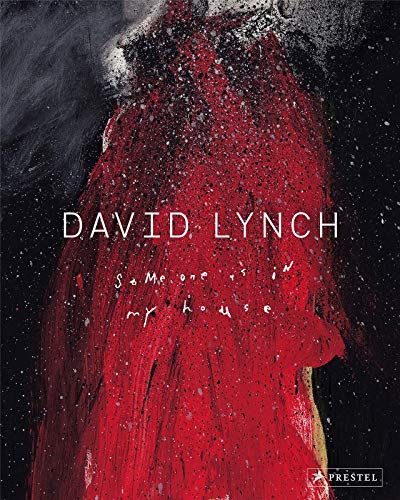 “Lynch’s art is like his films: unconventional, dark, bizarre, and expressive. His paintings are raw, echoing the primal energy of Francis Bacon and Goya.”

Someone is in My House by David Lynch, Stijn Huijts, and Kristine McKenna, is a large book of 300 images, the vast majority of them in color, encompassing all of the areas of Lynch’s creative output, which includes painting, drawing, photography, and film.

Lynch is well known as the iconic film director and writer of The Elephant Man, Blue Velvet, Mulholland Drive, and Twin Peaks, to name just a few. But he is also a prolific artist, a conceptual artist whose paintings are, as explained by curator Kristine McKenna, “ostentatiously handmade. They have a clumsy, accidental quality and come across as thwarted attempts to make oneself understood; they feel wrought rather than painted.”

Lynch’s special talent is his ability to tap into the subliminal influence of dreams, the unsettling quality of a nightmare or the waking dream. Often his ideas are subliminal, drawn from his subconscious, a dream solidified through paint and canvas. His use of black is also intriguing. Having begun as a painter he finds a way to connect with the visceral by laying down violent impasto brush strokes that speak more boldly to our emotions than subtle, refined, delicate strokes. Similarly, he uses deep blacks in paintings to evoke a sense of the unknown, dread, and the depth of the dream state.

Over the decades his work has undergone an enormous transformation from his pencil and pen-and-ink drawings in the 1960s, to his matchbook series—elaborate ballpoint or felt-tip marker drawings in the interior of actual matchbook covers— in 1970s; to the mixed-media of the 1990s, to lithographs of the early 2000s, and his large oil paintings of the past decade. This is an astounding body of work for someone known mainly for his filmmaking.

Lynch’s art is like his films: unconventional, dark, bizarre and expressive. His paintings are raw, echoing the sensibilities of primal energy and reminiscent of the work of Francis Bacon and Francisco Goya.

His drawings are irreverent, quirky, explosive, and often obscene. They strike a chord of unease and fascination that hints at stream of consciousness. He is the inveterate drawer. The term draftsman would imply a certain amount of finesse and craftsmanship whereas Lynch is more of an inexorable force in drawing, one who seemed to draw on every scrap of paper in the 1970s. Every surface was a blank canvas waiting for his outpouring, as in the case of the matchbook drawings, where he used either ballpoint pen, markers, or pencils to discharge his imagination.

The wealth of imagery in Someone Is in My House is complemented by the brilliant essays of the following: journalist and critic Kristine McKenna; Michael Chabon, author of The Wonder Boys; editor and arts curator, Petra Giloy-Hirtz; and the director of the Bonnefantenmuseum, Stijn Huijts, all of whom bring an insightful and compelling philosophical tilt.

His photographs are unpeopled, monochromatic, dark, and graphic. The heavy matte paper of the book with its lush color reproductions renders an intriguing, mesmerizing hold that you are drawn back to repeatedly. His monochromatic lithographs with thick lines, gray washes, and scattering of text messages are visceral and unrestrained, brimming with menace and a grotesque bluntness that is primordial.

Most of his oil paintings are large, bizarre, of a limited palette, littered with words, and highly expressive. As to people in his paintings, one can say that Lynch has found an abbreviated way, a shorthand, for the depiction of the human form; it is one that evokes strong emotion, is clumsy but cognizant of how it is perceived. As described by Stijn Huijts, “The human bodies that appear in the works are consistently deformed, mutilated, and incomplete, reinforcing a sense of horror and disgust.”

David Lynch’s Someone Is in My House is as unsettling as its title, but it is also a compelling book for anyone who is drawn to Lynch’s “unique” creative outlook.