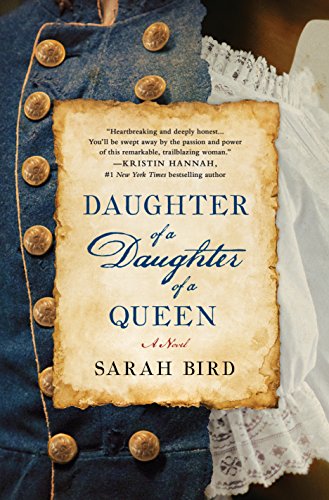 “Here's the first thing you need to know about Miss Cathy Williams: I am the daughter of a daughter of a queen and my Mama never let me forget it.”

From raunchy Civil War encampments to the dangerous, chaotic days after Appomattox to the precarious life of a Buffalo Soldier west of the Mississippi, Daughter of a Daughter of a Queen is the fictionalized story of Cathy Williams, a real but little-known former slave who disguised herself as a man and served in the U.S. Army as a Buffalo Soldier after the Civil War. While few details are known about the real Cathy Williams, author Sarah Bird weaves a sweeping tale that mixes humor, hope, courage, and gut-churning brutality to bring this forgotten character to life and offer a unique perspective on historical events.

As Union General Philip Sheridan sweeps through Missouri pillaging rebel farms and plantations, he mistakes britches-wearing Cathy for a man and takes her as “contraband” from her former master’s tobacco farm.

Separated from her family, she’s forced to travel with the Union army, work as a cook’s assistant, and find a way to survive in their gritty, unforgiving encampments as they battle their way to and through the Shenandoah Valley and ultimately on to Appomattox Courthouse. There, Cathy is witness to the Confederate surrender. With other former slaves she waits outside, predicting General Lee’s imminent hanging as a traitor. Instead, “our jaws unlatched and we gaped, listening in disappointed astonishment to the peaceable clop of Traveller’s hooves as he bore Robert E. Lee away, whole and unharmed.”

The war is over, the slaves are “free,” but the chain of command has broken down. Bedlam ensues, and Cathy must defend herself from vengeful ex-Confederates and decide what to do next. As a woman, her choices are limited. But as a man, she can earn $13 a month as a recruit in one of the U.S. Army’s new colored regiments fighting the “heathen savages” out west. Seizing the opportunity, Cathy disguises herself as a man, but now must survive the perilous life out on the plains and, worse, her fellow recruits who sense something is off and test her in vicious ways.

Feisty Cathy is impossible not to like although at times she seems to have an almost superhuman ability to endure physical pain. As the “daughter of a daughter of a queen,” she draws strength throughout her trials from the spirit of her African grandmother to persevere and even find love in unlikely places.

With astonishing period detail that transports the reader to Cathy’s brutal world, author Bird has mastered an engaging, folksy, narrative voice and a story brimming with clever descriptive gems such as: “If General Grant, savior of the Union, hadn’t had those three stars shining on the shoulders of the rumpled private’s blouse he wore, you’d of thought the man incapable of commanding his way out of a privy. Next to the pristine Lee, Grant in his borrowed, mud-splattered uniform looked like a mule skinner at the end of a five-day spree.”

Daughter of a Daughter of a Queen is a unique story told from a unique point of view that shines an entertaining light on an overlooked piece of history.