The Dark Remains: A Laidlaw Investigation, 4 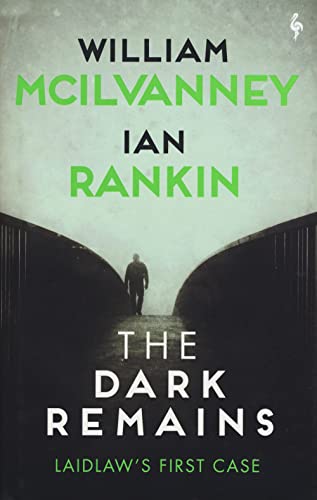 “Reading The Dark Remains yields far more than the strangely amazing and touching answer to ‘What if you combined crime noir geniuses McIlvanney and Rankin?’”

The evolution of The Dark Remains is highly unusual for the crime fiction field, where an author’s death and incomplete manuscript often leads to completion of the writing by someone less well known, scrambling to climb the ladder.

In this case, the half-written book found after William McIlvanney’s death in 2015 landed in the hands of acknowledged master of Scottish noir, Ian Rankin. McIlvanney’s Laidlaw novels, set in Glasgow, provided fertile ground for Rankin’s own development of the Detective Inspector Rebus investigations, set in Edinburgh.

Now the master, in collecting and completing this work, provides an unusual act of generosity to the dead.

The Dark Remains is a prequel to McIlvanney’s Laidlaw books. Jack Laidlaw is the “new boy” in the Glasgow Crime Squad, taking his seat in a season when shady and money-grubbing criminal lawyer Bobby Carter lands in an alley, dead. As Bob Lilley admits on the side to the Crime Squad’s Commander, “Jack Laidlaw is not an unknown quantity, sir. His reputation has always preceded him, which I’m guessing is why we’ve been landed with him. Who has he rubbed up the wrong way this month?”

In short, Laidlaw is no team player. But as the Commander points out, “He’s good at the job, seems to have a sixth sense for what’s happening on the streets.”

Even-tempered Bob Lilley’s got a tough job in “babysitting” this new member of the squad. From the moment the Bobby Carter case goes active, Laidlaw rejects all routine assignments (like going house to house) and heads directly for Glasgow’s underworld, which he already understands. Like the two (or is it three?) criminal gangs wrestling for control of territory and resources, and those who may want to promote a crime war.

In this occasionally off-balance volume, commentary from Lilley fills gaps around the investigation’s action. That slows the pace. But it also allows a peek at how current master author Rankin views the original character, as Lilley analyzes Laidlaw: “Maybe he’s a streetsman, the way Davy Crockett was a woodsman. Davy could read all the signs in the wild, he’d lived there so long. Probably wasn’t so good on the domestic front. I think Jack’s like that with Glasgow: He brings the city home with him, and that’s too much for even a decent-sized living room to contain.”

As the strands of gang action are slowly sorted out (with more murder, of course), Laidlaw’s marriage circles the drain. Compared to his work, his family life is tame, mundane, boring—and Lilley takes warning from his colleague’s domestic peril.

Even McIlvanney probably didn’t write “from beginning to end” without changes—so a lot of what Rankin received was likely to be far from finished work. The shorter paragraphs, less deep descriptions, and uneven pace (compared to classic McIlvanney) all suggest exactly that. So reading The Dark Remains yields far more than the strangely amazing and touching answer to “What if you combined crime noir geniuses McIlvanney and Rankin?”

Instead, it presents an unusual sort of time travel: not to the start of McIlvanney’s astonishing career in writing the darkness, but rather to the basic bones of how he shaped a Laidlaw investigation, working from crime victim, to criminals, to the rough and imperiled moral universe in Jack Laidlaw’s mind and heart.

Near the end, Lilley again responds to the Commander about how Laidlaw’s working out in the squad, and what could lie ahead: “He’s the business. . . . He’s a one-off in a world of mass production. He’s not a copper who happens to be a man. He’s a man who happens to be a copper, and he carries that weight with him everywhere he goes. . . . Mind you,” he felt it necessary to quality, “he can be a pain in the bahookie too, but it’s a price worth paying.”