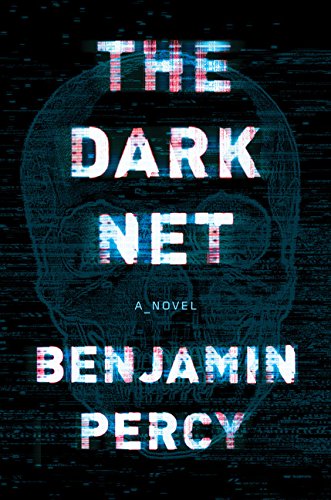 “The Dark Net is a fun romp through the blackest recesses of contemporary tech.”

The average person in the modern world is a cyborg. They have their regular human brain—a pulpy and limited mass of gray matter—and their robot brain. This second brain most commonly comes in the form of a cell phone with multiple apps and easy access to the Internet. Don’t know the answer to something? There’s an easy fix located in your pocket.

Most of us take for granted just how convenient digital technology makes our lives. Indeed, the Internet, which is the furthest thing from “wireless” and requires an advanced infrastructure, is the closest thing to ethereal or spiritual for hardcore secularists.

The Dark Net keeps all of this in mind when it outlines its nightmare scenario. What if, author Benjamin Percy asks, evil got control of the world wide web? Not everyday evil like malicious hackers or even terrorists. No, the evil in The Dark Net is otherworldly.

Set in the rainswept city of Portland, Oregon, The Dark Net concerns a rather unique cast of characters. First and foremost there’s Lela Falcon, a cynical reporter for the Daily Oregonian who is committed to selfishness and always getting her scoop. The only thing that humanizes her is her German shepherd Hemingway.

Lela’s sister is in many ways her opposite. Cheryl is a classic worry wart with more than a pinch of gullible. A former devotee of a Christian cult, the ever nervous Cheryl’s drug of choice is the SSRI Zoloft. Lela on the other hand snorts Adderall in order to keep herself going from one story to the next. Hannah, the source of Cheryl’s worries, is her blind daughter who has just been fitted with Mirage, a virtual reality headset that allows her to see clearly for the first time.

Unbeknownst to this clan, the darkness and the light are converging on Portland. Two knights in very tarnished  armor—the former witch Sarin and the failed child preacher Juniper—represent the forces of light. Arrayed against them are demons who are seeking a way to create a black cathedral in the heart of the city. This doorway, if opened, could unleash pandemonium. Sadly, that is exactly what one shady Internet company wants to do. They are helped along by blasphemous incantations and the presence of deceased serial killer Jeremy Tusk’s former apartment building.

Percy’s novel moves at a breezy clip. This cyberpunk horror novel is both mind-bending and mind-numbing. In between excellently crafted scenes concerning the true horrors available on the “dark web,” Percy gives Juniper and Sarin guns and plenty of ammo in order to carry out comic book-esque battle scenes.

As The Dark Net progresses, the story begins to feel more and more like a summer popcorn flick translated into print. Percy’s demons dress and act cool while making time consuming threats. Similarly, the good guys are all noticeably human and have human failings. Nevertheless, the light bites back against the dark using USB drives and hacked VR headsets.

The Dark Net is sure to please fans of modern American cinema. It is also sure to make horror and scifi aficionados happy. At its root, The Dark Web is a fun romp through the blackest recesses of contemporary tech.