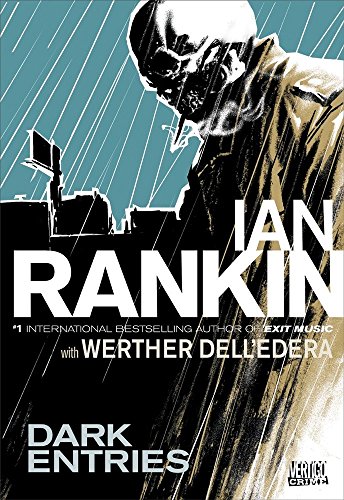 Ian Rankin is best known and often lauded for his Rebus series of crime fiction novels set in Edinburgh. He’s written relatively few standalones to date. So it was quite a surprise to find out he’d penned a graphic novel. Even more surprising is the hybrid genre he’s thrown himself into. Dark Entries is one part nihilistic private detective story and one part Barker-esque demonic horror. Now, this reviewer must confess a disgraceful lack of education in Rankin’s work for a self-confessed crime fiction junky, but it’s easy to imagine that his hardcore fans would have been pretty surprised by this deviation in style, form and genre. Pleasantly surprised.

Rankin’s protagonist in Dark Entries is a well-seasoned recurring character best known as the star of the Hellblazer series. Now, this reviewer is no expert in comic book trivia, and had to refer to Constantine’s Wikipedia page to learn a little about his history at DC Comics. However, as far as is decipherable, Rankin is sticking his neck out quite a bit by taking on this character. With so many chronicled adventures under Constantine's belt and a very solid fan base, the smallest of slips in characterisation are sure to draw criticism like flies to poop. But based on this reviewer’s slapdash learning, Rankin seems to have handled it well.

Constantine is an occult detective of questionable morals and sarcastic charm. In Dark Entries, he is approached by a network executive at the helm of a new reality TV series. The idea of the TV show is basically “Big Brother” in a haunted house. Said house is set up with all manner of technical jiggery-pokery designed to freak out the housemates. But there’s a ghost in the machine. Or several. And so Constantine’s mission, should he choose to accept it, is to go into the house in the guise of a surprise contestant and see what’s what. After a little bartering and a tone of sarcasm, Constantine agrees to go in, armed only with nicotine patches and a flimsy cover story. And then things get a bit FUBAR.

Dell'Edera’s art is bang on the money for this story. Working in stark black and white with little-to-no gray shading, somehow he manages to make each panel seem softer than it should and very easy on the eye. Constantine looks as badass as he should and some of the more imaginative art that features in the second half of the novel— bloody marvelous. Literally. Something else caught my eye in the novel’s presentation: at the midpoint, the story takes a From Dusk to Dawn-type twist when things just go nuts. From that point on, the panels are framed in a black background, which distinctly marks out the change in direction and sanity. It’s a neat little trick.

Dark Entries will take you to hell and (part of the way) back. In it you’ll find a fascinating satire of soulless reality TV and a thoughtful study in flexible morality. It represents another string to Ian Rankin’s bow and Vertigo Crime should be applauded for allowing him the opportunity to experiment.