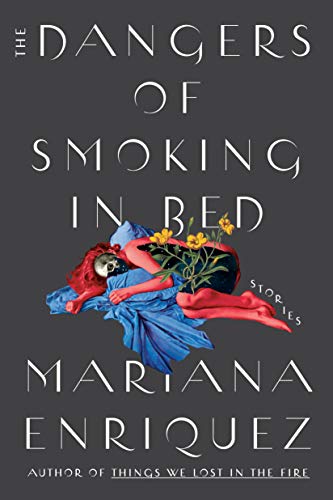 “The Danger of Smoking in Bed underlines the darkness of evil. By allowing a glimpse of its opposite: that light that will give hope, that sign that might show the path back to life for the women on the page, and for the women before it.”

Mariana Enríquez’s The Dangers of Smoking in Bed is the short story collection that follows the wildly popular, bestselling, Things We Lost in the Fire. It was first published in its original Spanish in 2017, and immediately became, like its predecessor, a cult favorite, the book dubbed the year’s best work of literary horror by the region’s critics, its author lauded as “Argentina’s grand dame of gothic horror“ by Clarín, still, arguably, that nation’s premier newspaper.

And it’s true that Enríquez writes horror. But it is not necessarily gothic, and it is never really rooted in the thoroughly fantastical. Much less is it a distillation of traditional Latin American magical realism. No. Her horror is real. And, more often than not, it happens to women. The cause, a part of regular life turned unbearable by some travesty of love, be it maternal, romantic, or even environmental; sociological. The cure for these strong women made ugly, hobbled by life, figuratively paralyzed as a result of particular combined lack of affection and acceptance, can just as often be found in a traditional rite, legend, or custom, as in the news out of that story’s particular city setting. It can sometimes be found in the offhanded rare wisdom heard while on a psychologist or counselor’s couch. Overheard from the mouth of a family wise one. Rarely in a magic trick, or a ghost, or the dead.

Most frequently, though, the source of relief or possible future well-being stems from the protagonist’s own psyche, from her own desire to live and be happy despite whatever Enríquez has thrown at her, and, in this way, the stories in The Dangers of Smoking in Bed, can be considered classic literature in the tradition of Aristotle or The Hero with a Thousand Faces, and not genre fiction.

But then, what is this “horror?” Where does it come from to animate this particular set of 12 robust stories? It is not exactly figurative, the occult of these tales, but rather, as in most of Enriquez’s superb work to date, rooted in culture. In anthropology. In well-trodden modern theology that sometimes feels as if it has been updated by what is documented in the decades of women’s magazines starting in the ’60s and ’70s. Lived feminism, in other words.

Take the title story, “The Dangers of Smoking in Bed.” In it, a lonely woman takes a look at her physical self. Sees it clearly. Maybe too much so.

“She put the bedside lamp under the sheets. Her inner thighs were dotted with small, superficial red spots; it looked like an irritation from heat or allergy, but it was something called keratosis, and she also had it on her arms, her hips, and a little on her ribs. The dermatologist had told her that with a lot of treatment it could get better, that it was nothing like more terrible conditions like psoriasis or eczema, but she thought it was plenty terrible, just like her yellow teeth and the blood that flowed every morning from her gums when she brushed her teeth—not a momentary bleeding, real streams of blood that dripped into the white sink. It was called periodontitis, though these days dentists used another, fancier name that she couldn’t remember now. Anyway, she preferred the truth, she preferred periodontitis. Her body was failing in many more ways that she didn’t want to think about. Who would ever love her like that, with dandruff, depression, zits on her back, cellulite, hemorrhoids, and everything dry, so dry.”

That is the horror. That dearth of love, of humidity, of water (life breath) bringing things—a city, a friendship, a life, a childhood—back from the brink of death, this character, like most of the female protagonists populating Enriquez’s fiction, waiting against hope that someone will save her from the horror her life has become.

In “The Well,” a girl is damned early in childhood and grows up, always under the care of the women in her family: a mother, a grandmother, a beloved sister, her curse taking the form of modern-day anxiety, movingly rendered.

“The morning she tried to leave the house to go register for college, Josefina found that the stretch between the door and the taxi was insurmountable. Before she could put one foot on the sidewalk, her knees were trembling, and she was already crying. It had been several days since she’d first noticed a stalling and even a reversal in the pills’ effect. She’d gone back to feeling it was impossible to fill up her lungs, or more like she paid excessive attention to every inhalation, as if she had to oversee the entrance of air for the system to work, as if she were giving herself mouth-to-mouth resuscitation just to stay alive. Once again, she was paralyzed at the slightest change in the placement of objects in her room; once again she had to turn on the bedside light before she could sleep, and now also the TV and the ceiling lamp, because she couldn’t bear a single shadow. She expected every symptom—she recognized them as they appeared—but for the first time she felt something else beneath the resignation and despair. She was angry. She was also exhausted, but she didn’t want to go back to bed and try to control her shaking and her pounding heart, or drag herself to the sofa in pajamas to imagine the rest of her life, a future of psychiatric hospitals or private nurses. Because she couldn’t resort to suicide—she was so afraid of dying!”

Later, upon learning of the betrayal that is the cause of all her woes, Josefina will want nothing more than the courage to die. More precisely, what she will want is the ability, the agency, to bring about her own death.

There we see the author’s other women at work. The ones who conform the rest of her working troupe of “actors.” Again and again, where there is a good, pure of heart, smart, worthy woman downtrodden by life, there will be other women: there to hurt other women. To betray other women. That juxtaposition of women as both heroes and antagonists, another recurring, and fascinating, theme of Enriquez’s work.

One other delicious pattern is the scatological as receipt of heartbreak, loss, erasure. The physical manifestations of love (or its lack), and of betrayal, the physical reflecting the evil performed on the loving. That is the horror. That is the horror she finds new and wondrous ways of weaving into her lyrically written tales, here expertly translated by Megan McDowell.

And yet, not even when inspired in myth is the magical here really magical or unreal. Instead, it’s causal, the horror accompanied by an ugly beauty, by a taste of redemption by which some of these protagonists will survive and even succeed in finding that sign, the symbol that feels or looks like love, or which at least clearly outlines the problem/obstacle they must conquer.

This is the case of the title story. Remember? The one of the yellow teeth and the woman who feared herself too ugly and forsaken to be loved.

“She laid another cigarette under the sheet and used to smoke to chase a butterfly that had snuck into her refuge, until it died. So you could suffocate them with smoke? What a weak and stupid animal. She let it convulse between her legs, and she saw the butterfly-moth’s legs that looked like tiny maggot-worms; for the first time she felt disgust, and she kicked it out of her bed and onto the floor. She made smoke rings inside the tent until she got bored, then decided to touch the ember to the sheet and watch as the orange-edged circle grew until it seemed dangerous, until the flame crackled and rose. Then she put out the fire on the sheet by hitting it, and the remnants of burnt cloth floated in the tent. She laughed at the small circular fires. If she poked her head out of the tent and peered into the semidarkness of her room, the burnt circles in the sheet let the lamplight through, and the beams shone onto the ceiling so it seemed to be covered in stars.

In such a way, The Danger of Smoking in Bed underlines the darkness of evil. By allowing a glimpse of its opposite: that light that will give hope, that sign that might show the path back to life for the women on the page, and for the women before it.