Daddy Issues: Love and Hate in the Time of Patriarchy 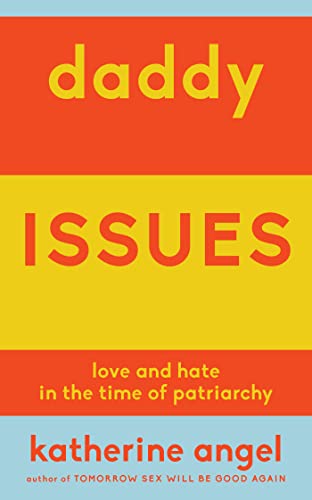 Daddy Issues: Love and Hate in the Time of Patriarchy is brief and refreshing for what it is NOT, a feminist treatise on paternalism and the female dynamic. Katherine Angel’s astute observations on the impact of the #MeToo movement, the retrenchment of feminism by younger women, and our current state of gender relations is compelling. And there are some squeamish moments expressed in verse when Sharon Olds is quoted when her father enjoyed putting “his hand up a waitress’s skirt if he could—hand, wrist, forearm. Woop! he would go as if we were having fun together.”

Credit to Angel for her observations on nurturing a child, “The formidable challenge in parenting is to nurture an environment which is sufficiently resilient and responsive to withstand the full blast of primitive love impulse and the full blast of aggression.” For a child to develop into an adult someone has to be defied and even at times hated without a break in the relationship. Yes, very relatable for parents.

Perhaps Angel’s most interesting notations are the way Black women approach feminism versus middle-class baby boomer white women, shining light on the differences in their work and home lives, with Black women less enthused about workplace satisfaction. Though Angel quotes others prolifically in this brief analysis, they do add perspective over time. Work has not turned out to be the refuge for women’s rise to equality. For it is younger women, millennials, who see the workplace strictures as binding not emancipatory.

Patriarchy, the rule of men experienced a resurgence in popularity with the Trump Administration and the heterosexual family, still appear to be held in thrall. As the noose tightens on female necks, with the loss of reproductive autonomy, and lack of societal support for basic childcare, men are on the march.

“These days sentimental dads get a lot of cultural caché. And the adulation a father receives when he does the mundane, relentless work of parenting, when he helps with the children or babysits them, reveals how ordinary acts of parental work and care add a glow of sanctity to the father while passing unnoticed, because expected, in a mother.”

“Daddy issues have been relegated to the realm of personal problems. Daddy wants what is best for Daddy.” Angel’s observations on Donald Trump’s sexualized relationship to his daughter Ivanka means his daughter is welded to his side. Even during Trump’s Apprentice run Ivanka described the ubiquitousness of his presence as being rather frightening.

Father as enabler of the future and enforcer of constraint. Daddy Issues doesn’t just stick to heteronormative paternal relationships, with observations from Michael Jackson’s victims, in Leaving Neverland. Not to mention multiple incestuous vignettes in this short read.

Her most clear-eyed writing portends the backlash of hate speech against the #MeToo era, as demonstrated by Dr. Christine Blasey-Ford’s treatment when she testified at Brett Kavanaugh’s Supreme Court hearing. More recently, Hollywood darling, Johnny Depp’s libel suit against his former wife probably muffled the voices of women in similar circumstances who deign to speak out. The harpy, the gold-digger, the ungrateful bitch—the usual terms lobbed at women deemed noncompliant.

One wishes the book were longer, especially as it lights the dark corners of fear, anxiety, depression, and frustration experienced by mothers who still provide most of the childcare. The black hole of the child’s needs sucking the lifeforce from the mother, leaving father to float outside the atmosphere coming in for occasional touchdowns. “It’s hard to play when you are scared—it’s hard to play with someone you fear. And it’s hard to love if you cannot express hate, if all you can feel in the gaze of the parent is anxiety about your love or the quest for it.”

SHe saves her most compelling words for last. “Writing is where I leave my state of suspended animation and start on my own life. It is where I refuse the expectation of compliance and where I can feel my aggression. It’s where I go to be deeply and freely alone; to create myself, and experience myself as real.”