The Cruel Stars: A Novel 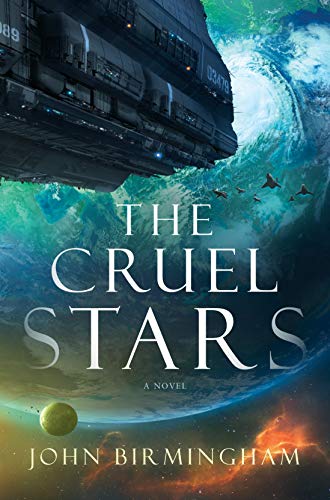 “There are few works of sci-fi today that put readers on the edge of their seats as well as giving them food for thought, and Birmingham succeeds at both.”

John Birmingham barreled his way onto the sci-fi scene with his breakout hit The Axis of Time trilogy, an alternate history epic that checked all the boxes and left no stone unturned. Safe to say that The Cruel Stars leaves his previous work in the dust.

The Sturm (think space Nazis) have returned to our part of the galaxy after being defeated centuries before and driven far beyond humanity’s border into uncharted space. However, years of prosperity and peace have left the rest of mankind lax and complacent, so when the Sturm launch an attack that virtually wipes out humanity’s leadership, it looks to be some dark days ahead. It’s up to five people to blunt the spear of the Sturm’s attack: a young princess; a Navy lieutenant; an outlaw; a traitor slated for execution; and a reclusive, retired admiral.

Calling themselves “The Human Republic,” the Sturm are racial purists, determined to destroy anyone who has an altered genetic code or whose brain has been augmented by neural enhancements. In a time when those with enough money can “relief” into a vat-grown clone and can instantly download information into their minds, the Sturm are pure, unaugmented humans who see most of humanity as mutant oligarchs who oppress the poor, who cannot afford gene enhancement or a neural network. In their minds, the Sturm are liberators who will literally stop at nothing to wipe out those they think stray from the human norm.

Our five heroes must contend with their own flaws before they effectively combat the Sturm. Princess Alessia of the Montanblanc Corporation is a spoiled brat; Lieutenant Hardy is thrust into a command position before she believes she is ready; Booker (sentenced to be mind-wiped or “erased”) is a member of a rather unpopular religion; and Sephina is an outlaw with a chip on her shoulder big enough to give Atlas pause. Add to this Admiral Frazer McLennan, a retired navy man who beat the Sturm the first time but thinks he’s a murderer worse than the enemy he faced. All are well developed, fully realized characters that leap off the page, adding to the grand depth of the story.

It’s obvious that Birmingham took some inspiration from Richard K. Morgan’s cyberpunk thriller, Altered Carbon, as well as tipping a wink or two to Blade Runner, but instead of being derivative, The Cruel Stars seems fresh and insightful.

Built as a space opera, The Cruel Stars succeeds on every level, offering an epic adventure of war, hope, death, brutal violence and despair. Birmingham paints his universe with a wide brush that misses nothing and manages to touch on some nuances that makes the reader think about such subject as identity and the condition of the human soul, but the book is written in such a manner as not to detract from the narrative.

There are few works of sci-fi today that put readers on the edge of their seats as well as giving them food for thought, and Birmingham succeeds at both.