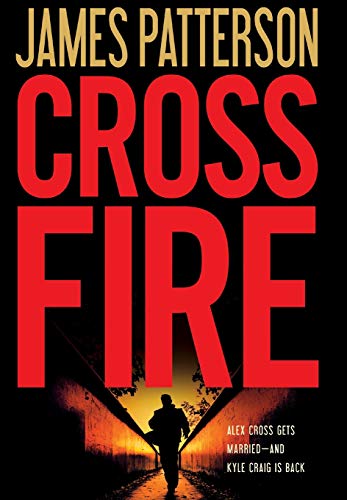 What can one say after reading the latest James Patterson novel, except, “He did it again.” In Cross Fire, featuring his popular protagonist, Alex Cross, the author employs an apropos contemporary topic to thrill his readers: politics. In a theme that many of his fans will likely embrace, a sniper is assassinating corrupt politicians and judges. Some might argue the killer is performing a public service. Nonetheless, the murders are a crime and their investigation becomes the jurisdiction of the Washington Metro Police Department (MPD) and FBI.

The murders come at a bad time for Alex Cross—he’s about to marry MPD Detective Brianna Stone. To further complicate Alex’s life, FBI Agent Max Siegel is also assigned to the sniper case. The two sleuths predictably butt heads in a turf battle to determine which agency has primary jurisdiction. Just when you thought Alex’s life could not get any more complicated, enter Kyle Craig.

Craig is an old nemesis whom Cross thought was safely ensconced in solitary confinement at a Colorado prison. He was . . . for a while, now he’s on the loose and on a mission to kill Alex Cross and everyone dear to him. Craig’s FBI nickname is The Mastermind. He’s a brilliant, diabolical miscreant who concocts a plan which allows him to get inside the Cross inner sanctum, indeed, even the Cross household, becoming friendly with his fiancé, children, and grandmother. He ingeniously interjects himself into the high-profile sniper case in a manner which no one would ever have believed possible.

In true Patterson fashion, the story includes every element a good cop tale needs: shootouts, car chases, mysterious characters, and bad guys galore. Add to the mixture a believable, yet complicated storyline, have it take place in the nation’s capital, and BAM! A recipe for another bestseller. I say another because the prolific novelist, according to Guinness World Records, has had more New York Times bestsellers than any other writer, selling over 180 million copies. Two Alex Cross novels have been made into movies: Along Came a Spider, and Kiss the Girls. Might this be a third?

Readers will enjoy this thriller as Patterson takes them on a tour of Washington, D.C., using its monuments and historical buildings as venues for nonstop action. He even manages to use the city’s homeless population in his stable of unique characters, and while doing so illustrates the immense divide between the powerful elite ruling class and the city’s residents. Remarkably, the least influential make the biggest impact in this adventure.

Patterson’s writing is crisp and tight; he doesn’t waste time on unnecessary words, making each one dynamic and central to moving the story forward. Thus, his chapters are short, inviting the reader to read just one more until before they realize it, they’re halfway through the book. His cop-speak, technical terminology regarding weapons and ballistics, and geographical knowledge of the city is spot on, adding a dimension of reality and believability.

The ending of Cross Fire is paradoxical—you know there will be a final confrontation between Cross and Craig, but it may not really be the end. The finale is such that the door remains slightly ajar, albeit only a hair, for Craig to somehow survive and continue to haunt Cross. It makes sense; if Patterson’s character can generate that kind of faithful readership throughout seventeen books, why not try another?