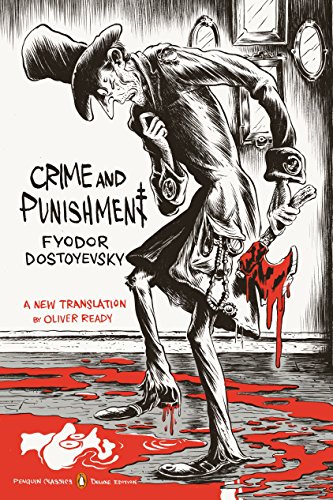 Fyodor Dostoyevsky’s Crime and Punishment first appeared in 1866, serialized monthly in The Russian Messenger. The same issues of this journal—extraordinarily, almost implausibly—carried installments of War and Peace. Crime and Punishment, the second of Dostoyevsky’s novels to appear after 10 years of Siberian exile, marks the beginning of his mature period. The novel has been rendered into English at least 11 times. Garnett was, for many years, the definitive version, though McDuff and Pevear/Volokhonsky are now considered formidable translations as well.

Let’s compare Oliver Ready’s new translation to his predecessors through a close reading of the novel’s opening paragraph and the first sentence of its third paragraph. Here’s Ready:

“In early July, in exceptional heat, towards evening, a young man left the garret he was renting in S_____y Lane, stepped outside, and slowly, as if in two minds, set off towards K_____n Bridge.

Not that he was really so very craven or browbeaten—far from it; but for some time now he’d been in an irritable, tense state of mind not unlike hypochondria.”

“At the beginning of July, during a spell of exceptionally hot weather, towards evening, a certain young man came down on to the street from the little room he rented from some tenants in S_____ Lane and slowly, almost hesitantly, set off towards K_____n Bridge.

Not that he was particularly timid or cowed—quite the opposite, indeed; but for some time now he had been in a tense, irritable state of mind that verged upon hypochondria.”

This is similar to Ready, with a salvo of commas and subordinated phrases, but more long-winded and stiff. It’s not apparent why McDuff chooses to write “K_____n Bridge” but “S_____ Lane,” without the final y. The decision seems arbitrary and peculiar.

“On an exceptionally hot evening early in July a young man came out of the garret in which he lodged in S. Place and walked slowly, as though in hesitation, towards K. Bridge.

This was not because he was cowardly and abject, quite the contrary; but for some time past he had been in an overstrained irritable condition, verging on hypochondria.”

Oddly, this early translation—which recently marked its centenary—feels quite modern, moreso than Ready or McDuff. Concise, fast-paced, comma-shy. This style is effective because it helps express and sustain the frenetic, breathless pace of the novel and its characters’ interior lives. Garnett even rejects underscoring, meant to convey the redaction of place names and thereby add an element of realism to the text. It’s easy to see why her translation was, for so long, the non plus ultra of Crime and Punishments.

Coulson (1953) was never a canonical translation, as we shall see:

“Towards the end of a sultry afternoon early in July a young man came out of his little room in Stolyarny Lane and turned slowly and somewhat irresolutely in the direction of Kammeny Bridge.

It was not that he was a cowed or unnaturally timorous person, far from it; but he had been for some time in an almost morbid state of irritability and tension.”

This is quite similar to Garnett, in many respects, though, his version lacks the same urgency, probably because of some awkward and questionable phrasings, such as “somewhat irresolutely,” a solecism in which the first word betrays the second. Deeply rebellious, Coulson chooses to cite the full name of both lane and bridge. He leaves out the word “hypochondria,” which none of the other translators do, perhaps because it lacks an adequate synonym.

“At the beginning of July, during an extremely hot spell, towards evening, a young man left the closet he rented from tenants in S____y Lane, walked out to the street, and slowly, as if indecisively, headed for the K____y Bridge.

It was not that he was so cowardly or downtrodden, even quite the contrary; but for some time he had been in an irritable and tense state, resembling hypochondria.”

Pevear and Volokhonsky are the only translation team we’ve discussed, and the latter our only native Russian. The style is not dissimilar to Ready, but with a more awkward, old-fashioned diction. The phrase “even quite the contrary”—typical of their rendition—is not only stilted and painful to modern ears but, with the extraneous “even,” archaic and non-native sounding. A google search of this phrase brings up few hits—primarily other translations of Dostoyevsky by Pevear & Volokhonsky.

It’s useful to examine an even smaller, but not therefore less critical, issue of translation—a single word. When Raskolnikov knocks on the door of the ill-fated pawnbroker, for reconnaissance, she calls him “father.” On the surface, of course, this is a generic greeting. Respectful and warm, but ordinary, as you might call someone “uncle,” “auntie” or “sir.” Ready’s choice is neither innocuous nor unimportant, however.

Coulson opts for “my friend,” which sounds rather intimate, and Garnett chooses the stiff and formal “my good sir.” MacDuff and Pevear/Volokhonsky render the phrase as “dearie,” which is old-fashioned, peculiar, and out of keeping with the pawnbroker’s otherwise gruff characterization. “Father,” on the other hand, resonates in a much more satisfying and multi-textured sense with the Oedipal gravity of Dostoyevsky’s novel. This deft command of le mot juste, so crucial in translation, is typical of Ready.

Now to more general matters. Ready’s text is, on the whole, the most elegant and restrained translation currently available. His prose is stately but never stodgy, lucid and precise, approachable but not false. The writing is less febrile than many of the others, which does not, as a result, fail to convey the feverish state of Raskolnikov’s consciousness.

On the contrary, Ready’s more objective and steady prose is better equipped, because of its greater detachment, to evoke the maelstrom raging within Dostoyevsky’s student and, indeed, his Petersburg. The style and syntax of Ready’s work is more natural and up-to-date, less alien, than the others. He captures the sound and sense of modern literary fiction, which is a welcome relief from the archaic diction and tone so often employed, or rather superimposed on, translations.

At the same time Ready avoids the obverse trap—his prose is not gauche or desperately current, the novelistic equivalent of Baz Luhrmann’s trite, tacky spectacles. Ready has said that he avoided words and phrases that entered the language after 1960. In his own words, he “sought to preserve both the novel’s spell and the expressive, jagged concision palpable from the very first sentence.” His interior monologue—such a vital component of Crime—is impressively fluid, plausible and streamlike, without the many iterations of “he thought,” over which the reader stumbles in previous translations.

An intriguing and recurring issue, for any translation, is the matter of whose English. Or rather what English, for language is a creature belonging to everyone and no one. It can be off-putting for a South African, for example, when a text is transformed into a strenuously American idiolect, and Canadians may find it distracting to read a specifically British transliteration. Ready’s work, though in no sense un-British—he’s an Oxford professor—and despite the extraneous u’s and inverted -er’s, strikes a balance between British and North American usage. The resulting linguistic neutrality means that even the most Albiocentric locutions—“Oi!” for instance—sound unequivocally harmonic and right. American ears will discover not a British, but an English-language, text.

A note on the endnotes—they are thorough, detailed, insightful, and savvy. The reader won’t feel tricked or abused after flipping to the back and wondering why on earth she had to know that, or realize that of course he already did. For the notes alone Ready’s translation is not only warranted and valuable but also quite necessary. He opens up the meaning and context of Crime, making the novel both more clear and more intricate.

Oliver Ready’s Crime and Punishment is a tour de force built from prose that is not only impeccable in its own right but also perfectly suited to the story, its characters, its epoch and themes. We should treasure this new translation and, indeed, this new book.