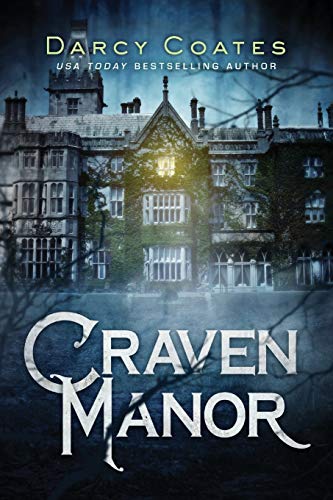 “a horror story, and something more. In its format and narrative, it’s also an adult fairy tale and a coming-of-age chronicle. . . . eerie, scary, and utterly delightful.”

Daniel Kane is out of work, supporting himself by menial labor while he searches for a real job. He rooms with his cousin Kyle in a six-story apartment block.

Daniel calls it “A house for desperate people,” of which he is definitely one.

Kyle has just informed Daniel he’s taking in a third roommate and evicting him from his room onto the living room sofa, not a fair deal for a relative who’s currently paying half the rent.

In the midst of Daniel’s protest, he finds a letter outside the apartment door. Addressed to him, it’s an offer of a job as groundskeeper for a place called Craven Manor.

“The letter was so bizarre he was having trouble imaging it was serious. Who gives directions to a property rather than an address? Why hire me? It’s not like I have experience.”

Kyle thinks it’s a prank. Daniel worries it’s to lure him to a secluded spot and a) rob him, or b) steal some major organ, like a kidney. In spite of this, he’s so hopeful he decides to follow up.

After all, he is a desperate person.

More written instructions, plus his first two weeks’ salary, paid in ancient gold coins, await. His unseen employer also offers a caretaker’s cottage. Though the grounds are overgrown and the Manor long abandoned, the cottage is clean and the shelves well-stocked.

Daniel only has to obey four rules:

He and Kyle celebrate at a pub where the bartender happens to know the story of Craven Manor, a tale of a family curse, an insane mother who murders her daughter and then disappears.

Not a comforting thing for a new employee to know.

Daniel’s going to be even more confused and definitely frightened as he discovers his employer is Bran Myricks, a shapeshifter caught in a shadowland for over a hundred years—neither dead nor alive—and the ghost of Annaliese, Bran’s younger sister, roams the Manor’s grounds, playing hide and seek among the tombstones.

“Annalise materialized on the other side of the glass. The corners of her mouth twitched up into a hint of a smile. Daniel blinked and the girl was gone.”

That’s not the worse thing, however, for the tower houses a locked room where Eliza Myricks, the murderous mother, has been imprisoned by her son for a century. Daniel is warned never to open that door.

“If Bran didn’t want him in the tower, that was fine by him. He’d watched enough horror movies to know what happened to people who opened doors they weren’t supposed to. His curiosity was no match for his desire to stay alive and keep his body parts where they were supposed to be.”

Danie’s told to stay away, and he does. Everything is going well, until Kyle, seeing an easy way to make some money, breaks into the Manor and unlocks the door to Eliza’s prison.

The monster that was Eliza Myricks is now loose in the form of a monstrous beast whose only purpose is to kill. It’s up to Daniel and Bran to stop her.

Craven Manor is a horror story, and something more. In its format and narrative, it’s also an adult fairy tale and a coming-of-age chronicle.

Daniel is an ideal hero for such a story. He’s young, slightly naïve, manages to keep a somewhat positive outlook in spite of his situation, and though he thinks otherwise, isn’t easily frightened. When confronted with Annaliese, he begins a spectral friendship instead of cowering behind his cottage door. He likewise easily adjusts to Bran’s less than normal appearance of wolf, cat, and giant crow.

Most fairy tales have to have a villain or a monster, and since Bran turns out to be a sympathetic character, that role falls to Eliza. As is usual in “locked door” tales, there’s the caveat, “Don’t open the door.” Daniel obeys; it’s his greedy cousin Kyle who’s the miscreant in this case, loosing Eliza upon an unsuspecting town and paying the price for his curiosity.

While the reader wishes for a Happily Ever After, Daniel and Bran must do battle against a raging shapeshifter, an event that makes Daniel lose some of his belief in the goodness of the world, while earning him the title of “hero” and forming him into a truly responsible adult.

For a horror story, it’s eerie, scary, and utterly delightful.