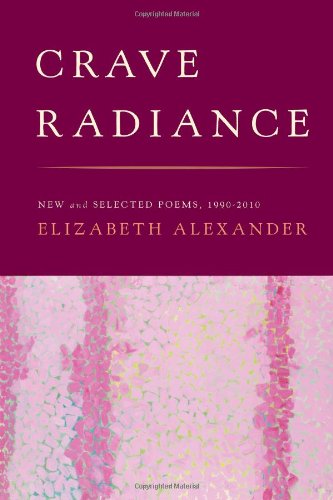 We crave radiance in this austere world,
light in the spiritual darkness.
Learning is the one perfect religion,
its path correct, narrow, certain, straight.
At its end it blossoms and billows
into vari-colored polyphony:

the sweet infinity of true knowledge.
(from “Allegiance”)

This fragment, from late in the collection, is the key to all that goes before it. The poems gathered here are a series of lessons, history tutorials that, together, chart a straight and narrow path through the annals of America. Elizabeth Alexander is an erudite and knowledgeable guide who draws on dark days and light, both personal and historical, to clearly demonstrate some of what it is, and has been, as a black woman in America.

Poet, essayist, playwright, and teacher, Alexander has published five books of poetry: The Venus Hottentot (1990), Body of Life (1996), Antebellum Dream Book (2001), American Sublime (2005), and, most recently, her first young adult collection (co-authored with Marilyn Nelson), Miss Crandall’s School for Young Ladies and Little Misses of Color (2008 Connecticut Book Award). Her two collections of essays are The Black Interior (2004) and Power and Possibility (2007), and her play, Diva Studies, was produced at the Yale School of Drama. In 2009, she composed and delivered “Praise Song for the Day” for the inauguration of President Barack Obama.

Alexander was the first recipient of the Alphonse Fletcher Sr. Fellowship; the first 2007 winner of the Jackson Prize for Poetry awarded by Poets and Writers; was awarded a National Endowment for the Arts Fellowship and two Pushcart Prizes, plus the George Kent Award, as well as a Guggenheim fellowship. Most recently, Alexander was named an Anisfield-Wolf Book Award winner for her lifetime achievement in poetry.

Alexander is a reputable part of the literary establishment. She is not, or is no longer, a rebel or a firebrand, and Crave Radiance is not a collection of radical militant cries for equality and justice. She acknowledges as much early in Crave Radiance:

I’m trying to neaten up my hand, my open-
classroom, flower-power hand. Am I creeping in
from the margins? Am I now current, legible,
when gold foil stars are not enough, nor penmanship?
(from “Penmanship”)

Yet it is this ability to work from the inside out that gives her work much of its power. Because she is such a well-respected literary figure, her views are more readily accepted. It is little wonder that she was selected to compose Obama’s inaugural poem.

The poems contained in this collection are beautiful reminders of what has gone before, signposts lest we forget. Alexander opens our eyes to the common everyday humanity of others. She uses elements from her own history to lay bare the very commonness of experience across cultures:

want to know what he taught me
about loving a glittering man.

I became a woman again
and remembered my grandfather

standing at the stove, cooking
a pan of fried apples for us

one Sunday morning in summer,
and I began to take his measure.
(from “Fried Apples”)

Alexander is a wordsmith of great skill and is keenly observant. She sees what it is to be black, to be a woman, to be poor, to be human, and is able to translate it all to the page. Crave Radiance is a wonderful cross section of a career that has gone from strength to strength. Alexander sees what it is that makes us tick and reflects it as our own humanity. She is inclusive, and her poems resonate with the lessons of history. There is such a lot contained in her poems that they can be read again and again and still leave you thinking.

Alexander’s is a poetry of history, of learning, of experience, and of humanity. Crave Radiance contains poems, new and old, that teach us and remind us of the lessons of history so that we do not repeat them. It is a collection to treasure and constantly return to—an appropriate marker of this point in a sweeping career that surely has considerably further to run.