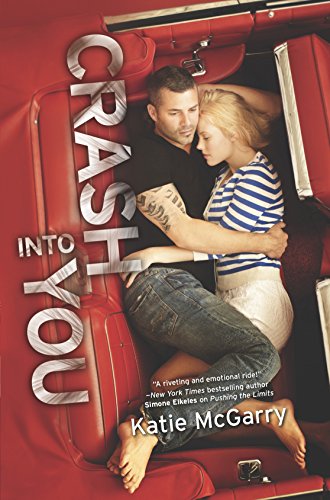 Crash Into You is the third book in Katie McGarry’s series of dramatic romance novels for the YA audience.

Told in dueling first person narratives, the plot kicks into high gear from page one, with high stakes conflicts for both its main characters. Rachel Young, the only surviving girl in a prosperous yet dysfunctional family of seven, conceals her panic attacks from her family until the ugly moment when she can’t anymore. A lattice of cracks in the family’s outwardly perfect foundation becomes quickly apparent.

As the book opens, she’s under tremendous pressure to do the scariest thing in the world—speak in public. Her four overbearing brothers, a grieving mother and a tone deaf father expect her to toe the line and stand up for the family’s chosen charity—a cancer foundation dedicated to the disease that killed the sister Rachel never met.

The only time she feels truly calm is behind the wheel of her Mustang GT. Her favorite escape, and a bit of coincidence, brings Rachel front and center at an illegal drag race, where she meets tough kid—and ace mechanic—Isaiah Walker.

The two teens are from different worlds. Isaiah has had only hard knocks—a mother in prison, and a life in foster care. In Rachel’s family, each of the five children receives his or her car of choice for their 16th birthday present. The only thing they have in common is their love of horsepower.

Isaiah, against his better judgment, spirits Rachel away from the drag race just as the cops arrive. But after the foster kid with the tattoos and intense gray eyes rescues her, Isaiah doesn’t call, even though he says he will. What follows is an intense ride through the underbelly of both teens’ lives.

Author Katie McGarry does a great job of ratcheting the tension from zero to 80 in the first pages and holding it there all the way around the track. Although the wealthy-yet-troubled-girl and under-appreciated-bad-boy paradigms have been done to death, Ms. McGarry keeps it fresh.

The focus on engines and drag racing makes for an unusual and convincing backdrop. Even if Rachel’s insensitive family is just a little too inventively broken to be believed, they’re colorful enough to intrigue. And Isaiah’s struggle to believe in his own better nature is credibly drawn.

As a romance ignites between Rachel and Isaiah, there are shades of West Side Story. Rachel’s well intentioned yet blockheaded brothers will do anything to keep the couple apart.

And other real life difficulties intrude—everything from drug dealers, a gambling addiction, a psycho ex-girlfriend, and a car accident conspire to keep the two apart. Before they can finally be happy, Rachel must sort out her family’s woes and recompute her responsibilities to them. Isaiah must come to terms with his estranged mother and commitment fears.

All in all Crash into You succeeds along the same lines as an early Simone Elkeles novel. There’s plenty of intrigue, angst, and chemistry between the couple to keep teen readers turning pages until the very end.