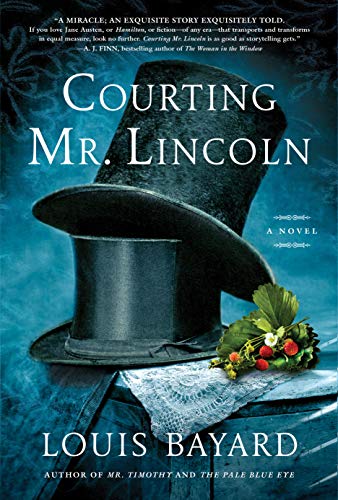 Ardent was the word that Joshua Speed, Abraham Lincoln’s best friend, used to describe Lincoln’s wife Mary Todd. And, as Louis Bayard explores in his thoroughly researched and thrillingly plotted Courting Mr. Lincoln, ardent might be the perfect word.

Where history has been less than kind to Abraham Lincoln’s widow, Bayard opens a new page on her life, one of her time in her early twenties, as a bright, fiery and incredibly politically minded woman who may very well have been Lincoln’s perfect match. Or, perhaps, as Bayard explores, that perfect match was his roommate, Mr. Joshua Speed.

Lincoln and Todd first meet in Springfield in 1840, when she has just been relocated to live with her sister and her family to, in short, meet a suitable husband. A member of a prominent family, Mary is expected to only be pursued by certain men and to marry well. Her sister has dutifully lined up a list of suitable choices—and Abraham Lincoln is certainly not one of them.

Young Lincoln, while at the beginning of a promising law and political career, is unpolished, uneducated, ill-mannered and, although he is incredibly well spoken, is not someone that anyone could imagine becoming president one day. He is fortunate to fall into the care of the polished, handsome, and unfailingly charming Joshua Speed, who fixes Lincoln’s wardrobe, teaches him manners, and introduces his new friend to all the right people on the political and social scene.

As the two men fall into a routine—evening walks, morning shaves, cocktail party banter, and fitting side-by-side in their shared bed at night—a deep and impenetrable bond forms between the two. And when the powers that be make it known that, in order to advance politically, Lincoln will likely need to take a wife, Speed behaves as though his friend has committed the ultimate betrayal.

Meanwhile, even Mary Todd can’t quite name why it is that she is so taken with Lincoln. It isn’t his looks or his manners, certainly, and, when it comes to women, that way with words that he is in such command of as a politician seems to escape him. Even still, the two form a secret bond that Lincoln, knowing of Speed’s jealousy, hides even from his best friend.

When the time comes to talk of marriage, Lincoln doesn’t even confide in Speed. And Mary Todd certainly knows she cannot tell her sister, who will never approve. Speed, discovering the couple’s secret, decides to take matters into his own hands in a devious plan to split them up. A plan that, of course, ultimately backfires.

It is no secret that Todd and Lincoln do eventually marry, but the path they take to get there is wholly unusual—and Speed, the man that is at the center of their marriage, is unique as well.

Bayard never truly voices a verdict on the relationship between Speed and Lincoln, on whether they were just the best of friends or something more akin to true loves. But either way, it is clear that Lincoln has a genuine fondness for Mary Todd and views her as much more than a political tool. She is a trusted advocate, an opinionated partner, and, ultimately, the person with whom Lincoln chooses to share his life.

Filled with rich historical detail and compulsively readable, Courting Mr. Lincoln is a story of a best friend, a future wife, and the political legend that they came together to create, each leaving an indelible mark on the man that would one day become president. Fans of historical fiction will be up late into the night to uncover the next chapter of this fascinating time in history.