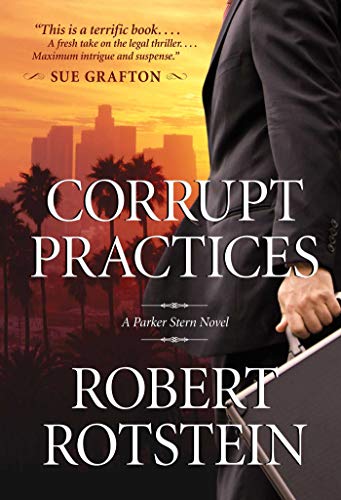 Here’s a new concept in a legal thriller: a litigator who suffers from stage fright.

But only in court.

When talking to witnesses, teaching, or even taking depositions Parker Stern is fine—it’s only in a courtroom he faints. This behavior is doubly strange because as a former child actor he knows all about performing—one of the reasons he used to be so persuasive in court.

Stern was a soaring legal eagle with Macklin & Cherry. But when the firm falls apart and his mentor Harmon Cherry commits suicide, Stern can’t argue the simplest case.

When Rich Baxter, an ex-colleague, calls from jail and asks Stern to represent him, Stern goes from a sense of loyalty. Baxter, a true believer, has been charged with embezzling millions from his church. The church (which bears a striking similarity to Scientology) was the main client of the old law firm, although Stern has always refused to work on any legal case that involved the cult.

Baxter is in full paranoia mode, claiming he’s being framed and Cherry didn’t commit suicide, plus someone from the church is out to get him. Ravings from a meth addict, Stern thinks . . . until Baxter is found dead in his cell. Baxter’s father knows the church will sue the estate for their money; so he hires Stern to prove his son’s innocence.

In the meantime another old member of the firm, Manfred Mason, throws some work Stern’s way, offering him a teaching position at a local law school where he’s now a dean.

The law school gig allows the author to bring up some thorny legal issues. One of the students, Lovely Diamond (yes, really), brings a first amendment case that will turn the reader’s stomach. But the student argues that once we start telling people what they can and can’t say, the road to perdition becomes more pronounced.

Parker Stern has issues. The cult wrenches at something within him that signals more than distaste—it’s a true personal hatred. And the reader can guess at why because there are enough hints sprinkled throughout to make Stern’s big revelation more of a confirmation than a surprise.

There are cautionary tales of falling deep into big law: one of Stern’s associates runs a coffeehouse, another disappears with wild tales of her party girl nights, and Baxter works full time as a lawyer for the cult. Mason goes to the law school, and Stern can’t go to court.

It would also be nice to read a novel where the main character doesn’t fall ill advisedly in lust with the wonky female character; unfortunately Corrupt Practices is not that book.

The author brings his own legal skills as a Los Angeles entertainment attorney into sharp relief here for no doubt he has seen his share of bad behavior.

There will always be room for compelling legal thrillers—the courtroom is a great stage on which to present good vs. evil. Lawyers who know the arguments for and against clients and issues make compelling theater. And readers get to witness the fracas with a cup of soda and a hot bag of popcorn.