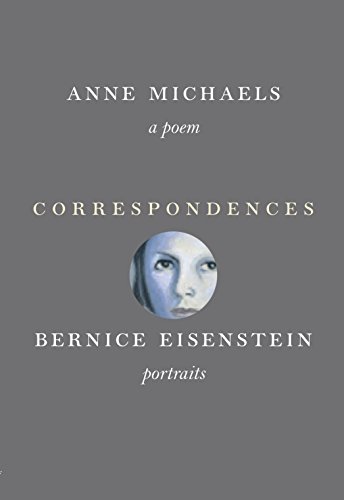 “This haunting and beautiful collaboration . . . allows the reader to unfold discoveries and reclaim a sense of wonder.”

Open this accordion-style book from one direction and the reader is presented with a series of arresting portraits by Eisenstein. Beginning with the poet Paul Celan and ending with poet/playwright Nellie Sachs, each haunting portrait peers out at the reader, and each is accompanied by a short quotation, haiku-like in its brevity and resonance.

Sachs and Celan had a correspondence each considered vital. It lasted from around the time of their meeting in 1960 until their deaths in 1970. (Sachs, 29 years older than Celan, died on the day of Celan’s burial.) Inside the book flap of Correspondences, where brief biographical information is given regarding the subjects of the portraits, it says, “In giving something to each other, they made a place beside them for others.”

Within the covers of this book, that happens again. Between their portraits are those of others: poets, artists, musicians, intellectuals, and a nearly anonymous child—all of whom were deeply affected by the Holocaust. A few among them are Franz Kafka, Anna Akhmatova, Albert Einstein, Osip and Nadezhda Mandelstam, Helen Keller, Joseph Schmidt, Albert Camus, Primo Levi, and the poet’s father, Isaiah Michaels.

Although it’s a beautiful object, this book is steeped in human suffering. In the center of the book staring out from the cover is a portrait of a little girl whose childhood was spent in a concentration camp. This child, known only as Tereska, was photographed after the war by David Szymin (who used Chim as his pseudonym when he worked as a photographer). The child stood at a chalkboard covered with a dusty scribble of white lines, her representation of “home.” At that time her “home” was an institution for disturbed children. How could she not have been disturbed?

But this is not the picture inside Correspondences. Here Tereska is presented, like the others within these pages, in a nearly flat portrait, the background just a wash of dull color, her face pale, her eyes dark and unflinching. While those who found some renown during their lifetimes are accompanied by brief messages in their own words, this child’s message is from an Emily Dickenson poem: “I’m Nobody! Who are you? // Are you—Nobody—Too?”

Turn the book over, open it from the other side, and one is presented with a moving, lyrical elegy that weaves together the stories of many of the people whose portraits rest on the other side of the pages. Their lives, stories, and shared sensibilities flow together and become part of the story of the poet’s father.

This was a man whose history, and whose politics, were as essential to him as his heart—the heart that he knew “. . . would get him into trouble. Like any worker, / he was afraid. But he never turned away except / to weep . . . look upon the sea, how beautiful, how much feeling, // as we fell asleep in the back seat.”

Water and light seem to enter into each page of the long poem, and life and death become something fluid. This is a territory in which not every reader will care to wander. Whatever boundaries a person likes to imagine there are between a personal life and a time in history, between a self and others, between life and death—must be reimagined in the wake of Correspondences.

The unusual format of Correspondences suits it well. This haunting and beautiful collaboration between Michaels and Eisenstein allows the reader to unfold discoveries and reclaim a sense of wonder. It is another example of the way grief can be a catalyst for art.

Next to the portrait of André Schwarz-Bart are these simple words that somehow encapsulate the experience of this collection: “Our eyes register / the light / of dead stars.”