From the Corner of the Oval: A Memoir 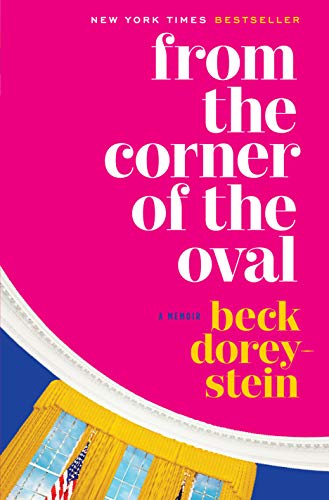 Wouldn’t young people—and even old people—be interested in the real goings-on during presidential press conferences and world-wide travel? Many would yearn to have been a fly on the wall throughout the history-making Obama era.

Beck Dorey-Stein was educated at Wesleyan, was a high school teacher in New Jersey and later on, while living in Washington D.C., was a tutor at the famous Sidwell Friends School, where the daughters of Michelle and Barack Obama attended.

At the time Dorey-Stein was tutoring, she had six part-time jobs just to be able to pay D.C. rent and college loans.

Then, on a whim, she applied to a Craigslist ad for a stenographer at a law firm. From this ad, she unenthusiastically landed a job as a White House staff stenographer. As a matter of fact, she almost declined the job offer.

“Who blows off an interview? Only a dumb twenty-six-year-old nobody going nowhere.” We only later find out how “dumb” she is, at least in the common sense department.

Dorey-Stein gets hired and begins to live a life that most millennials would only dream of.

World travel, daily, weekend, and off-hours interactions with White House staff as well as the Commander in Chief all seem to be glamorous, exhausting, and rewarding.

But although Dorey-Stein has a boyfriend, Sam from D.C., she takes up with a senior White House staffer, Jason, a Jim Carrey look-alike. What she initially takes to be a one-time indiscretion repeatedly becomes drunken trysts during all her world travels, as well as when Sam isn’t visiting Beck during her days off at home in D.C.

Meanwhile, Jason repeatedly advises Dorey-Stein that he is involved in a serious relationship with Brooke, the daughter of a Hollywood mogul. So what exactly could develop from Beck’s disillusion?

Beck remains in denial with this illicit Jason relationship for the five years she would be working in the Obama administration, all the while crying to her so-called gal friends—who also work with her and travel with her, and who continually counsel her to stay away from Jason The Player.

It’s almost like a fatal attraction because at some point she even considers harming herself with a knife. “Maybe this will make me feel better. But what if it doesn’t?”

“Never mind the shame—I push it to the back and pretend it isn’t there; I’ll deal with the sour stink later. Not now.”

Also, “Crackheads have more self control than I do.”

During the five or so “Jason years,” Dorey-Stein goes through two relationships with gentlemen she thinks are real boyfriends (first Sam, then later on Charlie) who both ultimately dump her for other women. Could she be too clingy? Does she exude too much insecurity?

It seems like Dorey-Stein, as well as most of the Obama staff, are almost always intoxicated and hung over.

This seems to be more a story of alcoholism and addiction rather than, what the reader would assume from the book’s title, an intimate view of working in the office of the President of the Free World.

Anticipating an insider’s guide to Obama the Man, interaction with him and the great things he accomplished during his eight years in office, the book instead becomes a rapid transformation into an insider’s guide to the woes and disappointments of a well-educated, though co-dependent, millennial’s love life.

Dorey-Stein is supposed to be an intelligent 20-something young woman in a high-level government administrative job; but it only proves that intelligence has nothing to do with confidence when dealing not only with catty co-workers, but with discretion in choices of partners as well.

The end of the book takes place during the transition from the Obama administration to Trump’s. Although she can—even if she isn’t in the same political camp—Beck refuses to stay on as stenographer to Trump after he creeps  her out on one of his first flights on Air Force One. “Trump is still in my face when a staffer touches his arm, distracting him.”

While Beck advocates the support of her strong and smart women co-workers in advancing their careers, she appears to have no control over her own betrayal of, and lying to, those same women, while they try to be helpful to her in coping with her infinite indiscretions.

Dorey-Stein’s high school-appropriate pining and insecurity about all her men leave the reader wishing she’d consult an advice for the lovelorn guide—or a really qualified therapist—for a smack or two of Dear Abby reality, right in the kisser.

Overall, one does obtain a decent insider’s look at the day to day activities both inside and outside of the Oval Office and intriguing worldwide travels with the Obama Administration. So if that’s the reader’s goal, it will be well-accomplished by reading the well-written From the Corner of the Oval by Beck Dorey-Stein.