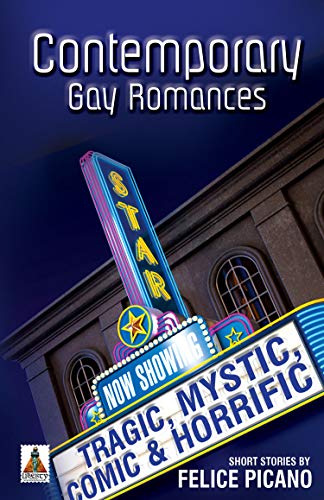 The word contemporary might be built right into the title, but it seems clear to the reader that, in writing this collection of short stories, author Felice Picano had disco balls in his eyes.

Each of the stories contained in this collection evokes memories of times now past, when there was such a thing as a gay novel (as opposed to other, “regular” novels). These lurked in specialized gay bookstores in Greenwich Village and San Francisco and, way in back of Waldenbooks, in a tiny section labeled “Gay Interest.”

There, Felice Picano’s early novels The Lure, Eyes, and Smart as the Devil could be found pushed up against The Front Runner and Dancer from the Dance. In their time, all were groundbreaking, even revolutionary, reflecting the post-Stonewall belief that homosexuals could lead lives that were “out and proud.”

Today, that war nearly won—with homosexuals at last being able to lead lives that no longer needing to be “out and proud,” are instead simply normal and everyday—these same books that were so shocking in their day today seem, well, quaint.

And so it is with Mr. Picano’s new collection of short stories, Contemporary Gay Romances, an anthology whose cover promises that the contents will be “tragic, mystic, comic, and horrific.” But what the reader gets is mostly, well, quaint. And sweet.

In beginning of the collection, the reader cannot help but note that, since 1975, little seems to have changed in the world of gay romance. That realm, which has gone untouched by such things as 9/11, economic meltdowns, or foreign wars, is still divided into the hunky and the non-hunky, with the hunky continuing to be every so slightly (to put it mildly) less intelligent than the non-. But nevermind, apparently the hunky can’t hide their bodies, no matter how loose-fitting their clothing, and they tend to have wonderful, thick heads of hair, which helps to balance the scales.

Here the story opens with that working writer’s wet dream, a free lunch in a four-star Manhattan restaurant:

“Both women had stepped away from the table. Lizabeth, his agent, to the restroom, Andrea Kelton, the editor, who’d just said the words to make him float on air while seated still on the big moderne banquette, had received a phone call from her office and had wandered off somewhere at the far end of the restaurant trying to get better wireless reception. Leaving Niels Llewellyn alone to sit and gloat. Around him: the delicate tinkle of crystal and silver against porcelain in the overpriced eatery, and its otherwise artful sonic décor of swirling waters covering the multimillion-dollar deals being proposed and sealed by the industrial and medial movers and shakers about the big, posh, water-hushed room.

“It was something to savor, as had been Kelton’s words, ‘this is unquestionably your breakthrough book. We’re so proud to be involved.’”

Personal experience suggests that, should the author believe agents and editors are saying that they are proud to be involved with the writer’s project, especially with publishing in general in its present state, it is perhaps time for the writer to be straightjacketed in that water-hushed room. But never mind.

And never mind that our author’s name is “Niels Llewellyn”—there will be plenty of others like it in these pages, from Victor Giove to Blue Andresson to Cap Hartmann—and forgive the fact that Andrea and Lizbeth are little more than window dressing here. After all, we’re here for the hunky construction guys outside:

“When he’d passed here earlier on his way to lunch, three construction workers had been sitting just over there, somewhat elevated, chowing down on hero sandwiches and messily drinking out of big thermoses as he’d stepped around the corner. One of them, maybe twenty-six, slab-sided big, with a mess of thick, bark-colored hair and post-twilight blue eyes, had suddenly stood up and stretched himself to his full six feet two inches, and Niels had stopped short on the sidewalk and just gawped at the big child-god as the fellow’s eyes closed and his mouth smiled and his muscles played along his arms and over his chest, obvious through his thin ‘Metallica Rocks!’ T-shirt, in sheer animal pleasure at such a simple activity as yawning and stretch.”

In short, a few more mustaches, some turned-up Izod collars and some colored bandanas in rear jeans pockets and the reader would feel required to play Donna Summer and Evelyn “Champagne” King in the background while reading the book.

The problem with all this is not the fact that it is tremendously overwritten, or that the stories have so very little to do, no matter what they promise, with romance—the child psychic in the wheelchair who is stalked and murdered by the serial killer after having been raped by him falls far short of anything resembling “romance” for this reader, no matter how much Mr. Picano might suggest that rape can be in any way romantic; no, the greater issue is with the stories themselves—and what they suggest the new, modern definition of what “gay fiction” might be.

And surely, the loss of gay bookstores and gay fiction sections of chain bookstores suggests that we have at long last as a culture evolved to the point that “gay” writing is merely a subset of all writing, no longer shocking or revolutionary, and, as such, must now be held to the same standards of excellence as any other form of literature.

In this collection, only a couple of stories rise to that standard. “The Geology of Southern California at Black’s Beach serves to remind us that, while the condition itself has been downgraded from life sentence to chronic condition, AIDS still is a catalyst for loss and sorrow among gay men in this nation, and perhaps now, when the eyes of the world have moved onto those other things (9/11, economic meltdowns, etc.), more segregating than ever.

And “Everyone Has a Shazam!,” a sort of modern retelling of Noel Coward’s “What Mad Pursuit?,” is a clever, well-written story that serves as a warning that one should make damn sure of their overnight reservations before setting forth on a trip—especially to Fire Island.

For the rest—the one with the ghostly poet lover, the one with the chocolate allergy (this one has a character named Achille l’Extringnon, a Belgian electronics billionaire, don’t you know), and the one with the young wife turning her husband over to his boyfriend while she sweetly dies murmuring, “true love . . .”—well, best to say that time spent reading Contemporary Gay Romance is time spent with Felice Picano in some lost disco of the heart and mind—a place where romance has the scent of cigarettes and the feel of stubble and black leather.