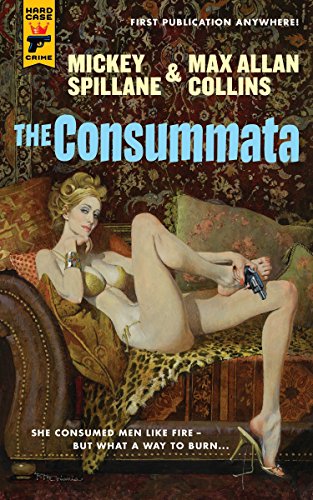 “Morgan is an enduring character and one that deserves to be around for a long time to come. If he remains in Mr. Collins’ capable hands he no doubt shall.”

The great writers of crime fiction live on through their creations. Ian Fleming’s James Bond has lived through 50 years of adventures thanks to a host of authors, the most recent being Jeffrey Deaver. Robert B. Parker completed Poodle Springs, the unfinished manuscript left by Raymond Chandler, and the late Parker’s own signature characters, Spenser and Jesse Stone, will live on in new works penned by talented authors.

Now the great Mickey Spillane takes his position in the pantheon thanks to the efforts of Max Allan Collins (The Road to Perdition) who has completed The Consummata, the second of Spillane’s novels to feature Morgan the Raider.

Morgan first appeared in The Delta Factor, published more than 40 years ago. In the second installment to feature the character, author Collins has wisely chosen to continue the storyline in that turbulent decade, giving us all the color and excitement of noir fiction in a character who is very much a product of his times.

The story is written in first person and in the opening, Morgan is on the run from the Feds in Miami who want him for the theft of $40 million he didn’t steal. When he is successfully hidden from them by the Cuban refugees of the city, he agrees to their request to help them find $75,000 that was stolen by one of their own, a man named Halaquez who they suspect is a double agent for the Castro government. The stolen money was intended to support their families who remain on that imprisoned island.

But shortly after Morgan begins his search, he comes under fire and becomes increasingly suspicious about his nemesis—who always seems to be a step ahead of him.

True to Spillane’s form, Mr. Collins pulls no punches when he takes us to the lower edge of the city and into the bordellos, bars, and sex clubs of Miami. He writes in prose that is short, terse, and colorful, giving the reader an immediate feel for the tension that is so vital to the genre while maintaining a brisk pace.

Morgan is an enduring character and one that deserves to be around for a long time to come. If he remains in Mr. Collins’ capable hands he no doubt shall.