Conspiracy of Silence: Sportswriters and the Long Campaign to Desegregate Baseball 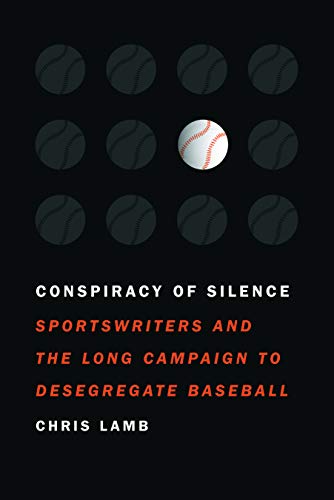 “Conspiracy of Silence offers overwhelming evidence of the effectiveness of the black press in advancing integration in this country.”

A campaign to desegregate professional baseball that lasted more than 20 years proved necessary in order to counteract the “conspiracy of silence” that had prevented a skilled black professional player from entering Organized Baseball, the complex of major- and minor-league clubs made up mostly of men who opposed integration.

This campaign was led not by white liberals but by black newspapermen, and it was complemented by the leftists who published The Daily Worker. It was fed by the gradual change in public opinion about integration, and it culminated in legal action that could have resulted in forced integration, at least in New York City, if Branch Rickey, the president of the Brooklyn Dodgers, had not forestalled such action in 1946 by hiring Jackie Robinson, a black professional, for his minor-league team in Montreal, after which the player was advanced in 1947 to the Dodgers.

Author Lamb shows by means of multiple examples that the main weight of the campaign was carried by black newspaper writers and that Branch Rickey’s role in integration has therefore been exaggerated.

The stars of the decades-long effort to pressure white club owners to affirm American democracy by permitting black players into their organization were men like Wendell Smith of the Pittsburgh Courier, Fay Young of the Chicago Defender, and Sam Lacy of the Washington Tribune. Coverage of their effort by white sportswriters was spotty at best and weak at most.

During the campaign by black writers they did just about everything they could in order to make the white club owners wake up to their duty as Americans to open the top levels of the American National Game to all its citizens—by which they meant black citizens as well as white.

They published open letters to owners, they kept asking Commissioner Kenesaw Mountain Landis why he did not insist on desegregation, they polled managers and players, they tried to get into closed meetings, and they even brought black players to unscheduled tryouts at spring training centers.

Their efforts elicited various non-answers from baseball men, all the way from “No comment” to “The matter has never come up” and “This is a closed meeting,” “There is no unwritten rule against blacks, and “I would personally be in favor, but there are too many people against it.”

Mr. Lamb does not fail to explain that blacks had already played in the earlier major leagues, with few incidents, until the reactionary social climate of the 1890s made club owners decide to force them out. Early black major-leaguers like Fleetwood Walker were known to be highly skilled professionals, like those who played in the 1920s and 30s in the Negro Leagues, set up by black entrepreneurs. Star black players attracted white fans as well as black ones.
Meanwhile, white writers kept claiming that integration would cause race riots, was not wanted by black players, or would be unable to sustain itself because there were no black players good enough for the majors. None of these things happened.

White writers, states Mr. Lamb, accepted racial exclusion as the status quo largely because they themselves were part of the baseball establishment and depended on the owners’ willingness to share news items as well as their largesse in paying the reporters’ travel bills. Moreover, the white writers considered themselves the pals of the players, socialized with them, and protected their secrets, including membership in the Ku Klux Klan.

Supporters welcomed into the campaign of the black newswriters included thousands trade unionists, prominent individuals like Paul Robeson, and eventually politicians like Representative Vito Marcantonio, who represented the radical left. Many well known persons associated themselves with Mayor Fiorello LaGuardia’s Committee to End Jim Crow in Baseball. Rodney Smith of the Daily Worker kept up the pressure, too.

For most of the campaign, white Americans remained ignorant about the sustained effort of blacks to permit their star players into Organized Baseball. It says something about the level of understanding of democracy that Americans had attained in the 1930s and 1940s when it took black reporters and left-leaning whites to show them where they should stand on the matter of integration.

Most Americans brought up the rear when it came to opening this society’s institutions to everyone. They saw nothing missing when Organized Baseball and its supporters constantly trumpeted the “great democratic game of baseball, which everyone can play and where everyone is welcome.”

Potential legal actions, based on the Ives-Quinn Act of 1945 banning discrimination in hiring, brought the matter to the fore. Then Vito Marcantonio introduced a resolution in the United States House of Representatives to authorize the Commerce Department to investigate racial discrimination in Major League Baseball. Similar measures came up before the New York City Council as well as in the cities of Boston and Chicago.

Rickey, who had been contemplating hiring blacks either for a new black league or a black team, had been scouting individual players since 1943. When queried in the spring of 1945, he admitted being interested in black baseball and claimed he had spoken twice to La Guardia about black players. He gave a real tryout to two players that spring, but it came to nothing.

World War II did begin to alter the views on segregation of many Americans, although the promised integration of the military was incomplete. And government officials in city and state governments, especially in New York City, kept bringing up noncompliance with the Ives-Quinn Act, which could affect the three major-league teams in New York. Then The Committee to End Jim Crow in Baseball threatened to organize a march to end at Ebbets Field and the Polo Grounds. La Guardia planned to devote a radio broadcast to the issue.

Meanwhile, Rickey was working out his plan to hire Jackie Robinson. Rickey told La Guardia he would have an announcement to make and asked the Mayor to postpone his speech. A few days later, Robinson’s debut at Montreal was announced.

Chris Lamb’s dozens of quotations from black sportswriters and descriptions of their proactive campaign makes it clear that it was they, not Rickey, who carried the ball for integration of black baseball and that Rickey took advantage of their commitment and hard work.

In fact, it may be that Rickey’s one-club integration retarded the pace of black admission to the ranks of Organized Baseball’s players. In a presentation called “Race, Rickey, and ‘All Deliberate Speed’” on March 9, 2012, in Tempe, Arizona, Mitchell Nathanson, a law professor at Villanova University School of Law, asserted during a conference of baseball historians that if Rickey had not intervened in La Guardia’s legal moves, the three New York teams might all have been forcibly integrated in the spring of 1946.

He mentions other cases like Brown v. Board of Education, pointing out that the resulting law, at first weakened by the vagueness of the term “all deliberate speed,” began taking effect when federal funds for its enforcement became available. Nathanson argues that Rickey’s action in hiring Robinson actually delayed the legal integration of baseball in the major-league teams of New York City, which after Robinson’s hiring made only “spotty progress” in integrating their teams.

Nathanson’s research thus not only complements Mr. Lamb’s, it carries much further our understanding of how selfish Rickey’s move was. Rickey is shown to be less interested in integration than in being seen as “baseball’s great emancipator,’” as white writers began to describe him.

Conspiracy of Silence offers overwhelming evidence of the effectiveness of the black press in advancing integration in this country.