Conquistadores: A New History of Spanish Discovery and Conquest 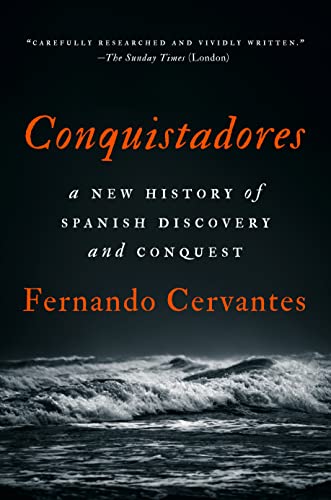 “. . . Cervantes describes the exploring, the diplomatic activity, the rivalries, the fighting, and the personalities with delicious granularity.”

It is important for historians to avoid making judgments about the past based on the values and mores of the present. The best historians place themselves in the footsteps of their subjects and view events through the prism of particular times and places. Fernando Cervantes, who teaches early modern studies at the University of Bristol, understands the importance of taking that approach in his new history of Spain’s conquistadores.

Cervantes’ purpose in writing this book is to dispel the common portrayal of the conquistadores as “brutal, genocidal colonists, culpable of a savage assault on innocent civilizations and perpetrators of the first great act of early modern colonialism.” To be sure, Cervantes does not shy away from describing the cruelties and atrocities committed by the conquistadores, but he places those events and the record of exploration, discovery, and conquest by the likes of Hernan Cortes, Francisco Pizarro, and others, in the proper cultural-historical context.

In the first place, the indigenous peoples of the 16th century in the lands that became Mexico, Peru, and other Latin American countries were not “innocent civilizations,” but instead practiced human sacrifice, cannibalism, and vied with each other for territorial and political control.

Secondly, the European invaders likely killed more indigenous people by accidentally spreading disease (especially smallpox) than by warfare. And finally, the Spaniards were consistently able to attract rival indigenous groups as allies against the feared empires of the Aztecs and Incas—all was not peace and harmony in the region before the Europeans arrived.

Cervantes begins the book with Christopher Columbus’ early discoveries of islands in the Caribbean Sea that Columbus believed were part of the East Indies. Spain’s explorers—acting with the support of their Hapsburg rulers—were seeking to reach Asia by traveling west. Instead, Columbus and his successors found the “New World” which Hapsburg rulers sought to both economically exploit and to convert to Christianity. The Spanish explorers brought with them both guns and priests.

And Cervantes shows how very early in the 16th century conquests, some priests spoke out about the abuses and atrocities committed by the conquistadores. One such critical priest was Bartolome de Las Casas, who after witnessing the injustices of the encomienda system on the islands of Hispaniola and Cuba (under which Spaniards effectively enslaved the indigenous peoples), preached and wrote denunciations of the conquistadores.

When Charles V of Spain was elected holy Roman Emperor in 1519, he pledged to maintain the unity of Christendom and spread the gospel of Christ throughout the world. The conquistadores would help implement Charles’ mission. Each new conquest in the New World was followed by efforts at conversion of the usually polytheistic indigenous populations. Indigenous idols were replaced by Christian images. Churches and chapels were built.

But the conquistadores also sought gold, silver, emeralds, and other items of value. Fortunes were made and the Crown made sure to get its share. Hapsburg rulers (Charles V and Philip II) became dependent on riches from the New World to help fund their European wars and their growing and diverse empire. But Cervantes also notes that the Spanish Empire survived for three centuries due to its recognition and respect for local traditions and privileges, which to some extent resulted from the influence of Christian teachings. Cervantes is careful not to fall into the trap of artificially separating ecclesiastical and political history.

Cervantes devotes the bulk of the book to the conquistadores’ actions in Mexico (Cortes and his forces against the Aztecs led by Moctezuma) and Peru (Pizarro and his forces against the Incas). These are generally familiar tales, but Cervantes describes the exploring, the diplomatic activity, the rivalries, the fighting, and the personalities with delicious granularity. Though always outnumbered, the conquistadores triumphed due to overwhelming firepower and a successful strategy of fomenting divisions among the indigenous forces.

Cervantes concludes this new and revisionist history not by absolving the conquistadores of blame for the cruelties and atrocities they inflicted on the peoples they conquered, but by including in the history an appreciation of their achievements, especially their legacy of helping to create institutions that allowed for “a high level of local autonomy and regional diversity under a monarchy that was always deeply respectful of the local rights and privileges . . . of its various kingdoms.”

The conquistadores, Cervantes writes, “deserve to be judged from a more sympathetic perspective than the one that has hitherto condemned them uncritically and on the basis of simplistic and even mendacious caricatures.”