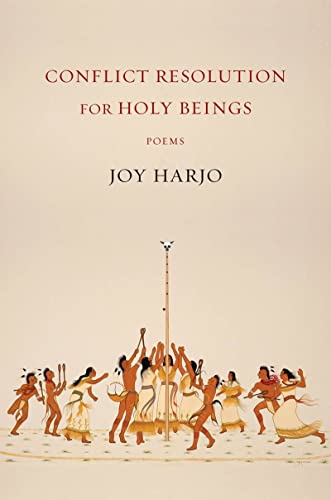 These days, anthologies of American literature usually include Iroquois, Sioux, and Navajo stories about the creation of the world. They often end with contemporary American Indian poetry, the oldest and longest-running body of ethnic verse in North America and the United States.

The last volume of the Norton Anthology of American Literature includes the work of Joy Harjo, who was born in Tulsa, Oklahoma, in 1951, and who is one of the most productive of contemporary Native American writers.

A member of the Creek/Muskogee tribe and the author of 15 books and five music albums, Harjo seems to hold nothing back in her writing, neither her own gritty experiences or her own outspoken views about nearly everything under the sun, from the songs of crickets to the suicide watch.

In her new book, Conflict Resolution for Holy Beings, which contains prose as well as poetry, she begins with an invitation to just about everyone to settle down and read her lines. “Put down that bag of potato chips, that white bread, that bottle of pop,” she writes. “Turn off that cellphone, computer, and remote control.”

Plugged into the latest technologies and connected to ancient traditions, Harjo means to be a kind of modern day medicine woman and mythmaker. In her poetry she can be humorous and caustic, folksy and philosophical as in “Rabbit Is Up to Tricks” in which she offers an account of the origins of the world and the creation of human beings.

And she can he angry and defiant in “No” in which she writes, “Yes, that was me you saw shaking with bravery, with a / government-issued rifle on my back.”

In-between the poems she includes short prose pieces that honor American jazz and her “saxophone ancestors” as she calls them, such as Lester Young, Ben Webster, John Coltrane and Jim Pepper.

Harjo likes to list names and to honor the families and tribes to which she belongs. So she acknowledges the work of her contemporaries, Leslie Silko, Sherman Alexie, Louise Erdrich and Sandra Cisneros, much as she reveres “grandma and grandpa, aunties and uncles, the children and the babies.”

Her poetry opens up to the universe and to the chambers of her own innermost heart. Indeed, she comes back again and again to her heart, though she travels from Alaska to Albuquerque and Times Square. Harjo seems to be at home almost everywhere on the planet. She’s also comfortable speaking directly to readers and offering them guidelines and guidance for survival in the midst of doubt, discontent and death.

“Use effective communication skills,” she writes. “Give constructive feedback.” Conflict Resolution for Holy Beings is a kind of manual for navigating the rapids of the 21st century.

In “Had-It-Up-to-Here Round Dance (for two voices)” she speaks as a tribal elder who complains, “I don’t like your girlfriend and her high heeled shoes/And her skirt up to here.”

In “Equinox” she talks to herself (and to other writers) and advises, “I must keep from breaking into the story by force.”

In “Sunrise” she offers a transcendent vision of the American Indian who “struggled with a monster and lost” but who “will go/Where they’re a place for us.”

Harjo’s latest volume is by an Indian, about Indians and for Indians, but it’s also for all “holy beings.” Playful and somber, it goes back into the sorrow of history and forward toward “the jury of destiny.” On nearly every page, the language comes alive and makes the reader feel a sense of connection to earth, sky, cloud and eternity. In Conflict Resolution for Holy Beings, Harjo soars majestically, wails beautifully, and prays soulfully.