Confiscation or Coexistence: Egyptian Temples in the Age of Augustus (New Texts From Ancient Cultures) 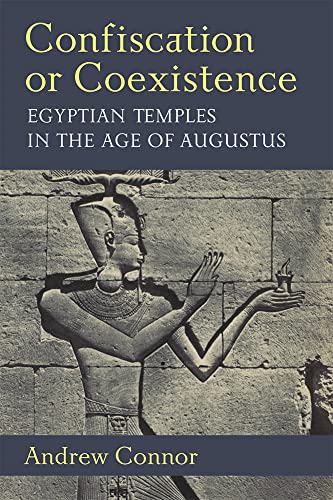 “A superb example of historical research at its best.”

Andrew Connor is careful, methodical, and thorough as he reexamines the accepted history that temple property in Egypt was widely confiscated throughout Egypt by the Roman imperial powers. Connor looks at the evidence, examining context as well as particular details. He outlines his scrupulous methods and diligently follows through in the chapters that follows. His book is a superb example of historical research at its best.

Connor ends up refuting a long-accepted narrative, one that goes to the heart of imperial power and the nature of how the Roman empire treated provinces.

“The question of confiscation reaches to the very heart of our understanding of the Roman Empire and of Egyptian history. The temples had a massive presence in the physical, cultural, and economic landscapes of Egypt—and remain strongly visible in the archaeological, literary, and papyrological record. If the Romans did confiscate this property, it provides an example of three separate issues, all of which would have serious, wide-reaching implications. First, it would be an example of state control over the Egyptian temples more dramatic than even Akhenaten’s famous preference for the Aten. Second, it would demonstrate the largest peacetime interference into provincial life by a Roman administration in the history of the empire. Third, it would offer an obvious solution for the enduring question of what caused the collapse of Egyptian religion in the later Roman period.”

The original confiscation story was based on a single papyrus dealing with the management of a single temple, from which early 20th century British historians extrapolated a country-wide administrative change. That seems like quite a leap. Does the papyrus refer to a local property dispute or something broader? Connor marshals the evidence by looking into a range of temple documents. Unlike his predecessors, he is scrupulous about not reading more into the evidence than what it clearly offers.

“Our interest in the text should lie with the evidence for division within the temple and the developing language of legitimacy, and not with this petition as the founding stone for a vast program of confiscation—an interpretation that the ancient writing cannot bear.”

Connor then looks at the context of temple administration within Egypt and more broadly within the Roman Empire and makes a convincing argument that to extrapolate a province-wide policy from one temple’s issues is a big leap, both in logic and in history. So why did such an interpretation arise in the first place and why was it so readily accepted for decades?

Once again, Connor uses clear logic and historical context to explain how the early 20th century British historians who popularized the confiscation theory were affected by their own colonial views toward Egypt. He paints a devastating picture of how contemporary values shape one’s historical interpretations, a vivid warning for historians today who impose their world views on the past.

Referring to British archeologists and historians, he sums up:

“I have suggested thus far that Grenfell and Hunt’s interpretation [of the temple papyrus] was a product of their intellectual, cultural, and imperial setting, especially in light of the conversations around religion and power in British Egypt in the first years of the twentieth century . . . especially as it worked hand in glove with the wider ideas around how empires, British or Roman, tended to behave.”

In other words, the current British attitudes toward their colonial Egyptian subjects and their religion was transposed onto the Romans, since the empires could be assumed to have similar reactions. Except, of course, they didn’t. The historians saw a history that validated their own attitudes, one that reflected their own perceptions of how the Egyptian temples should have been handled.

“All histories are the products of the time they are written, and our job as historians is to propose narratives that best fit our understanding of the evidence.”

Unlike his predecessors, Connor does precisely this, and provides not only a deeply important repair of a long-held historical misconceptions, he shows how history can be done most effectively: by impartial, careful examination of the evidence, rather than looking for what we want to see.