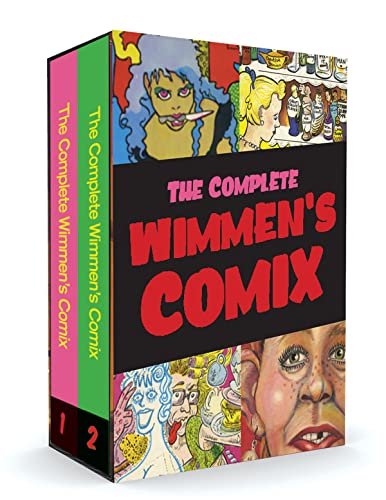 This slipcased two-volume edition contains the unique issue of It Aint Me Babe (1970) and 17 issues of Wimmen’s Comix produced between 1972 and 1992—all of which are now out of print.

Retired underground cartoonist and current comics historian Trina Robbins sets Wimmen’s Comix in their context in her brief introduction to the publication. Since the 1960s, San Francisco was the heartland of underground comix production; a guesstimated 98% of the comix artists were male and not always welcoming to women cartoonists. A highly misogynistic treatment of women was—and is—the staple fare of many underground comix.

Robbins was toiling in one of these male enclaves—the Berkeley Tribe—when someone showed her a copy of It Aint Me Babe the “first feminist newspaper” in the country; without delay she ditched the Berkeley Tribe and began to work at the Babe. Having honed her comix skills on the Babe, she gathered together like-minded women artists to produce an all-women comic book, Wimmen’s Comix, which first appeared in 1972.

“From the beginning, the Wimmen’s Comix Collective really was a collective with a rotating editorship, so that no one person could be a dictator.” All the submissions were reviewed by a core group and consensus reached as to what should be included. As Robbins freely admits “The first few issues were uneven. Many of the women who submitted work to us had never drawn a comic before, and it showed. But we were more interested in giving women a voice than in how professionally they could pencil and ink. As cream rises to the top, those who decided comics weren’t really their thing dropped out, and the rest of us improved with each issue.”

The editorial of Issue #2 reiterates that the Wimmen’s Comix collective had no desire to be an “exclusive, divisive or female chauvinist group” but rather aimed to encourage female comix artists to find their voice. This vision is reflected in the editorials which are usually folksy, jokey, and self-deprecating, introducing each of the participants for a particular comix issue in an affectionately mocking way.

Take for example the editorial or “editorelle” for issue #11 on Fashion which pokes fun at the artists’ own sense of fashion: “Sharon’s bleeding madras shift is complimented by Trina’s pink pedal pushers and cranberry poor boy sweater”—both ensembles purchased for $1.87; “utility and style embrace in Caryn’s forest green kimono as she produces bottles tucked away in her sleeve” and so forth.

The many photographs of different combinations of the collective suggest they were a cheery and positive gang of slightly hippy suburbanites.

Topics covered in the comix were resolutely those which comix produced by men did not touch at all or touched in a completely different way; bad dates, prostitution, women’s liberation, pap smears, abortion, menstruation, small bladders, child-birth, child sexuality, lesbian sex, appearance “issues” (e.g. having both pimples and wrinkles for a first date proves that God is not a feminist), work-place harassment, and the trials of being a female comix artist.

By Issue #3 the collective was receiving hate (and other) mail (“Mail to Females”) from both men and women. The Wimmen’s Comix crew were criticized both for being too radical and not radical enough, though they had admirers of both sexes, too.

Militant feminists criticized them for keeping the word “men” in Wimmen; though with the final issue, it was changed to Wimmin’s Comix, and that spelling also appeared in small print in #5. They were also accused of being “heterosexist” because there were no lesbian contributors until Roberta Gregory contributed “A Modern Romance” to Issue #4, though lesbian content was plentiful from the outset.

After the Los Angeles-based comix—strikingly named Tits and Clits—was “busted” for pornography in 1973, Ms. magazine felt it could not take the risk of advertising Wimmen’s Comix and returned their cheque for $103. Perhaps this was not Ms. magazine’s finest hour.

This new crackdown on alleged obscenity came as a result of the June 21, 1973, Supreme Court “community standards” ruling that gave individual towns and cities the power to decide what was and was not obscene. This led to local authorities busting “head shops” that typically sold underground comix, clothing, and anything identifiably associated with “sub-cultural” activities related to music, tattooing, and cannabis consumption. According to Robbins this ruling was actually the beginning of the end for underground comix, as many head shops were afraid to carry them. “Still, Wimmen’s Comix would last almost another 20 years before giving up the ghost”.

It would be interesting to hear more about the reasons behind Wimmen’s Comix having a six-year hiatus, from 1977 to 1982, and for their returning with Issue #8 in 1983. It is hopeful Robbins or others of the founding artists will prepare a more comprehensive history of this and other wimmen’s comix in due course.

The revitalized editions took on a number of special themes (#9 Women at Work; #10 The International Fetish Issue (memorably including Toilets of London by Caryn Leschen); #11 Fashion Confidential quoted above; #13 Occult; #14 Disastrous Relationships; #16 Tribute to Men (primarily focussing on men’s potency or lack thereof rather than their roles as fathers, brothers or art teachers, as was noted by the editor); and last but by no means least #17 the Giant 44-page Kvetch Issue for Mature Readers—Me Worry. This latter included some personal favorites such as “There’s No Such Thing as a Pregnant Silence” (Penny Moran van Horn) and “Transference” (“I’ve Got the Wise-Ass Disease” by M. K. Brown).

By now the publications were more sure-footed and including seasoned cartoonists like Alison Bechdel (in issue #11 Fashion (Dykes to Watch Out For) and in Issue #15 (Mitt) now globally recognized in the graphic novel scene.

The comix strips show a complete range of different illustrative styles from heavily inked and intricate to the most minimalist of lines. A very few artists relied on a level of graphic detail which one might well imagine being classed as pornographic by local councils, while others—perhaps the majority—relied on punning word-play and allusion; however, the fact that these publications were deemed “underground” at all shows how far we have come.

Several comix involve historical reconstruction, sci-fi fantasy, and utopian or dystopian scenarios, but the majority are grounded in the time and place of their creators with “politics” being personal and with relatively little reference to the outside world, even the outside world of the larger feminist movement. The editorial of Issue #14 (Disastrous Relationships) refers to the recent “disastrous” presidential elections, but that is one of very few mentions of a broader political scene. It has to be said that ethnic diversity appears not to be very pronounced either in the collective or in their cartoons.

The consensus among the collective appears to be that the underground comix business was killed by distribution issues: “underground comix had done splendidly in head shops, and Wimmen’s Comix had been carried in women’s bookstores as well. But by the late 1980s, head shops were a thing of the past, and independent bookstores, faced with competition from the big box stores, such as Borders and Barnes & Noble, were closing. Soon the only place to buy comics was in comic book stores, which were owned or managed by 30-year-old male mainstream superhero fans, who catered to young male superhero fans from 12 to 30. It was a boys’ club all over again. If the comics shops didn’t want to carry underground comix, they really didn’t want to carry anything that catered to women and girls.”

On a much more positive note Wimmen’s Comix should take its share of the credit for nurturing so many now-celebrated women comix artists who have eased the genre out of the underground and into the mainstream of comics and graphic novels—and for providing a lot of raucous laughs to themselves and their readers on the way.

This publication is a very welcome addition to the feminist media archive and a rich resource for further research and study.