The Complete Junior and Sunny 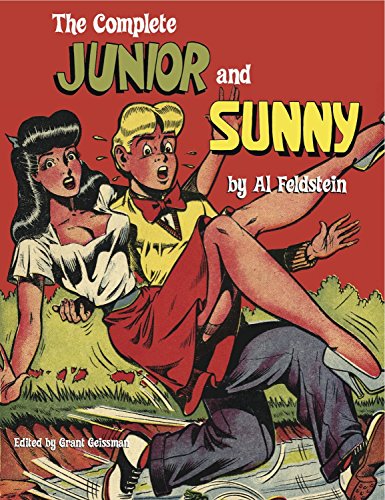 “the work of a confident, skilled artist who made comics not only more fun, but also better in the process.”

Fans of teen humor books such as Archie and those who love good girl art of the highest order are going to want to make sure they check out The Complete Junior and Sunny by Al Feldstein.

One of the many forgotten titles that dotted the landscape of comic books after the end of the war, Junior and Sunny made some readers laugh and for others filled their heads with other ideas. Even in today’s Katy Perry’s “I Kissed a Girl” Top 40 permissiveness, some of Feldstein’s good girl art is still suggestive.

As editor Grant Geissman makes clear in his introduction, it is a wonder that Fredric Wertham didn’t cite the titles when he wrote the book that nearly condemned the comic industry to death in 1954, Seduction of the Innocent.

This is a collection of memorable comic art from a man that few have ever really heard of. Work created by Al Feldstein has cut a wide path through modern culture. As one of the guiding lights of EC Comics in the fifties his stories and art influenced filmmakers from Spielberg to Lucas.

The list of writers who read his own work in titles such as Weird Science or Tales from the Crypt when they were younger who went on to shape modern horror, science fiction, television, and film is too long to even begin to start here.

From 1956 to 1984 Feldstein was the editor of MAD magazine. That job covers an influence on modern humor that extends from National Lampoon to Saturday Night Live, to standups such as Jerry Seinfeld and Billy Crystal and into the sensibilities of modern situation comedies.

Before rising to these much vaulted heights, Al Feldstein, like every artist, had to start somewhere. The Complete Junior and Sunny by Al Feldstein not only collects the complete run of that famous teen/good girl art title, it also provides a crucial link in the growth of Feldstein

Geissman’s observant and understanding introduction places Feldstein’s work and life in perfect context for not only his work, but the time in which he lived. His writing on the syndicate which published these titles (Fox) reminds us that tough times and unscrupulous businessmen are eternal. As a historian what Geissman writes enhances and adds to what we see in that spotlight without once detracting from it.

On the first step to his illustrious career Feldstein started in sweatshops cleaning pencils and running errands. Sweatshops were the middle ground between many artists and publishers.

A publisher, looking to make money off of the comic books but lacking the creative talent to create them would approach a sweatshop such as the one run by Jerry Iger and Will Eisner with an order. The sweatshop would create, draw, write, and ink a title—essentially doing everything except printing and distributing the book. It was incredible training ground for anyone looking to get into the field.

Feldstein watched as established greats such as Lou Fine and Reed Crandall cranked out page after page for a variety of publishers. After a stint in the Air Force the future editor of MAD went to school but kept his feelers out for work in comics. He took freelance work where he could.

With a growing family he needed work and eventually hooked up with Fox Feature Syndicate. They needed a teen humor book, and after getting burned for his work on another teen book (Harold Cob), Feldstein knew exactly what to do.

Geissman points out in his introduction that “Junior was, of course, an intentional knock-off of Archie, which was the leading ‘teenage’ comic book at the time.”
You can then see the similarities with Archie, Veronica, and Reggie, when Geissman goes through and details the inspiration behind the characters created by Feldstein.

As with Archie, even in its earliest day as it is was then, stories in Junior and Sunny can seem derivative and are often simple high school related gags. Misunderstandings fill the air as junk drives go amuck. There are concerns about the school paper getting out in time. An attractive cousin that Junior hasn’t seen in a long time shows up and wreaks havoc with him. Every story sees the gang dealing with stupid, unimaginative adults and bullies as well as they can.

What these stories have that Archie didn’t is that Sunny and Junior are drawn by Al Feldstein. This is good girl art of the mildest order—but thrilling and occasionally deeply suggestive just the same. There is lingerie, shorts that are a quarter of an inch away from being too short, and shower scenes that leave as much as they can to the imagination.

Where the owner of Archie wanted things to be toned down, the owner of Fox wanted Feldstein to go as far as he could. What is amazing is that Feldstein’s work is still mild compared to other titles published by Fox!

Most importantly he also learned how to construct a story; meet a tight deadline; deal with tough, demanding owners, and other artists and inkers; and run a shop—all talents he would put to use a few years later when he began working with William Gaines who owned EC and MAD.

This is where Feldstein went to college. Still, for all he accomplished later in his career, it is his art that stands out. Few were able to draw women the way he could while balancing stylistic innuendo and titillation with high-quality slapstick and hi-jinx.

Geissman has not only assembled a tribute to one of the industry’s great, he reminds us that a lot of hard work went into becoming that legend. This is the work of a confident, skilled artist who made comics not only more fun, but also better in the process.