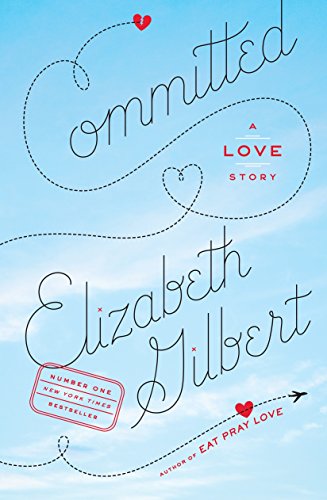 How does a successful author follow up mega-wattage success? That question has plagued best-selling writers since they started keeping track of book sales. (Hello, Shakespeare!) Elizabeth Gilbert answered that question by writing a book that’s quite different than Eat, Pray, Love, the book that vaulted her to literary superstardom. For the uninitiated, Eat, Pray, Love was Gilbert’s best-selling divorce memoir and carried the author’s distinctive and lyrical voice as she traveled through Italy, India, and Bali.

Her success became the pinnacle of the memoir genre and inspired Oprah and Julia Roberts to come knocking. Both women bought dozens of copies for friends; Oprah hosted on her show several times, and Roberts is currently turning Eat, Pray, Love into a major motion picture.

In Committed Gilbert picks up the story where Eat, Pray, Love left off, with the author still romantically entangled with her darling Felipe. The book opens with a prologue that attempts to answer the question of following up success. Her answer: The feat is impossible. So she decided to go in a totally different direction. The result is a book that takes an almost anthropological, Margaret Mead-esque approach to the hows and whys of marriage.

The book’s prologue points out that Gilbert had been working on a manuscript for a year before she decided the tone was too self-conscious. Not wanting to repeat her work line-for-line she threw the baby out (with the bathwater!) and started afresh.

Gilbert and her amore were content to stay united in partnership, not marriage, until the Homeland Security Department got involved and questioned Felipe’s legal status to remain in the U.S. A kindly U.S. Customs agent suggests the one way to get around the complications was to marry and therein our heroine begins her tale.

Fans of Eat, Pray, Love will find the same type of delicious writing that propelled Gilbert to success with that tome and her previous books and magazine career. The only downside is that the stunning moments of beauty are knitted together with some prose that can sometimes feel pedantic. Readers looking for a repeat of the same type of navel gazing about the inner workings of one of humankind’s most vaulted institutions might ultimately be disappointed. Confined to the conventions of marriage, albeit crossing a span of age and cultures, Gilbert’s limited topic and extreme focus can sometimes feel like neurosis.

As a writer, Gilbert is like a Golden Retriever with a sunny disposition and willingness to please. “To thine own self be true,” Hamlet’s Polonius reminds us. She does accomplish her mission, though her readers may want to know what happens next. The book ends on the not-too-surprising conclusion but leaves you craving more. Perhaps she’s saving those details for Book Three. No matter. Gilbert’s ability to turn a phrase and her skill at elevating the mundane to the magical guarantees her a legion of loyal and committed readers.

Alison Woo is the co-author of Marketing with New Media: A Guide to Promoting Your Small Business With Websites, E-zines, Blogs, and Podcasts. She is also a freelance writer published in various newspapers and magazines.