Come Back in September: A Literary Education on West Sixty-Seventh Street, Manhattan 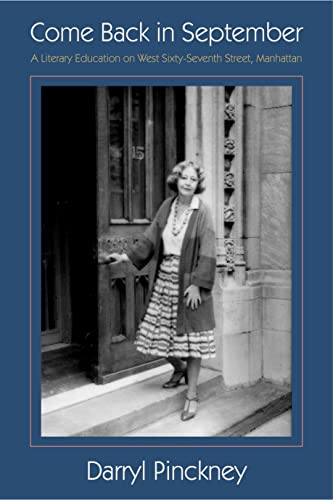 “engaging, well-written, and certain to please the strongly literary minded.”

“Saigon had fallen and I was in Professor [Elizabeth] Hardwick’s living room with Susan Sontag,” says author Darryl Pinckney, then a twenty-something Columbia student and now one of our leading essayists, in his memoir Come Back in September.

The sense of wonder in his words reflects precisely how he felt, having applied to novelist and critic Hardwick’s (Sleepless Nights) creative writing class at Barnard and now finding himself a regular in her upper West Side duplex apartment, a hive of the New York intellectuals of the 1970s, who swarmed there in great number.

On any given night, young Pinckney encountered not only literary celebrity Sontag, but also luminaries from The New York Review of Books including editor Jason Epstein, co-editor Barbara Epstein (a close friend of Hardwick), and many others.

Outside the confines of the apartment, Pinckney hung out—clubbing, dancing, and doing drugs—with young friends Brad Gooch and Luc (now Lucy) Sante. He worked part-time in Manhattan bookstores and at The New York Review (in his sixties, he remains a regular contributor), where he would take phones calls from Murray Kempton, arrange to ship galleys to Gore Vidal, and generally make himself useful.

But the continuing attraction for 20 years was his mentor and friend Elizabeth Hardwick (1916–2007), a stern, direct, accomplished writer who was an invaluable mentor.

“You’re the worst poet I’ve ever read,” she told him. “You mustn’t write poetry anymore.”

There were only two reasons to write: desperation or revenge, she said. “A passion for reading” is the only way to learn to write. And: “You must be able to take rejection.”

She didn’t believe in the magic of Maxwell Perkins and other celebrated editors. “You had to be your own editor. It was a part of writing.”

“Even a bad book told her something,” she’d say.

Much of this was spoken on the long red velvet sofa that dominated Hardwick’s living room.

“She said that I mustn’t be too literary, that I must try to earn money.” (Advice she herself might have benefited by.)

But she knew how to encourage. While working with him on revising a piece on James Baldwin, she declared, “Now you’re writing.”

They had a “regular appointment” for Sunday dinner at her apartment. “I would come sit at that dining room table for decades. She was not a good cook.”

“Elizabeth had a way of talking to young writers that assume we understood what was involved in the production of: anything. Part of what made her such a powerful example that a writing life was possible for you, too, was that she took your anxieties seriously. But all problems about writing had one solution: you had to, you said you would, it was the contract you made with yourself, it was your life.”

A sharp observer, his memoir soars when he writes about his beloved Baldwin, who visited the Review’s office when his last novel, Just Above My Head (1979), was published.

“Word that he was in the building touched every corner of the editorial floor. Editors hung up and floated from their offices into the central aisle; we editorial assistants slowly raised our fantastic necks over plants and cubicle divides. The elevator doors opened onto what was an unnatural silence for a business and there were the unprecedented eyes, the famous man’s short height, the authority of his dark skin.”

Later, he writes of Baldwin’s funeral:

“On that gray afternoon in December of 1987, down the street from Columbia, St. John the Divine heaved with organ prelude, rows and rafters of Skip Gates, Caz Philips, Maxine de la Falaise, Jules Feiffer, and then the pounding of drums. Following the cross came Maya Angelou, Toni Morrison, Amiri Baraka, Eartha Kitt, so small, Quincy Troupe, with dreadlocks, and others.

“The drums got louder and Baldwin’s old mother, buried in a handkerchief and a big fur coat, was wheeled up the nave, and his brothers who bore an eerie resemblance to him, and more family, Ossie Davis and Ruby Dee said to be among them, and friends of every age and hue, old men on canes, babies in blue blankets.”

Pinckney, a diligent note-taker, often goes on about nothing much here. There is plenty of gossip, much detail about rivalries and animosities, and passages about writers quoting from the work of the masters at one another. At times it is a bit much—dizzying, not always in a good way—and the author’s use of the dash for quotations marks is simply annoying. (Yes, Joyce did it; so, what?)

Nonetheless, Pickney captures heady times among the New York literati of the period and pays proper homage to his mentor. His book is engaging, well-written, and certain to please the strongly literary minded.