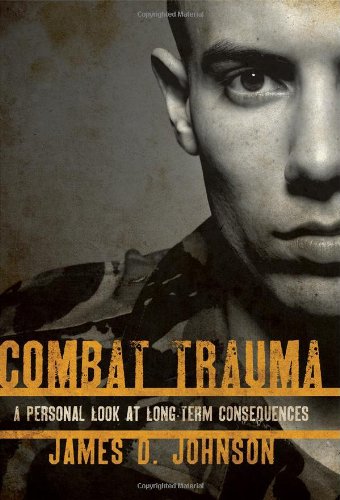 What is it like to get shot in combat, to feel your life draining away and know there is nothing you can do to help yourself? Kind of like this: “The squishing sound is like a knife opening a cold watermelon. . . . The round enters just above my left rib cage and exits just below . . . my right nipple. . . . I instinctively place my left palm over the exit wound and can feel only warm blood . . .”

James D. Johnson’s important new book, Combat Trauma: A Personal Look at Long-Term Consequences is a first-person account of enduring post-traumatic stress disorder, the grim acronym known as PTSD. Acquired during his service as a Vietnam grunt, Johnson describes this life-changing disorder as a “combat wound to the soul.”

Now a retired Army chaplain, Johnson has broadened his story by the testimony of fifteen other Vietnam vets—all combat survivors and all living with their personal nightmares. Their credentials: 78 combat decorations, including 2 Silver Stars and 16 Presidential Unit Citations. Their combined, intensely personal and brutally honest testimonies immediately mark this book as a neo-classic in the literature on PTSD.

But Combat Trauma also poses immediate and troubling questions for American military manpower policy, which routinely requires soldiers to perform repeated combat tours. Johnson argues, “In sports, the more one conditions his or her body . . . the greater the chance of success and the less chance of injury. Not so with trauma. The greater the exposure to traumatic events, the greater the likelihood that psychological injury will occur.” (Reviewer’s emphasis.)

Understand those implications? We have fought two back-to-back wars with an army of Other People’s Kids far too small for its tasks. The only way to support the surges in Iraq and Afghanistan was to send the grunts back for three or four combat tours, some lasting up to fifteen months. During Vietnam the normal tour was only one year, which may help to explain why the major problem confronting Army leaders today is troop suicides.

Both now and in the future, those leaders need to take Johnson’s insights seriously. “Many of us are still numbed out, feel tainted and even have difficulty enjoying the simplest pleasures. Our combat trauma was like being burned on the inside. . . .” In Iraq and Afghanistan we have lost only a tenth of the soldiers killed in Vietnam; but these same symptoms are likely to be common among those surviving recent combat with jihadis and insurgents.

Clearly though not elegantly written, Combat Trauma’s real worth lies in its forthright, almost clinical dissection of symptoms—withdrawal, fear, hyper-vigilance and flashbacks being only a few. Even more significant are the equally unblinking looks these veterans provide about the effect of these recurring symptoms on key life issues—work, careers, faith and even morality. It might be PTSD, but many non-veterans will share the rich contempt these former soldiers feel for “wannabes, liars and pretenders”—especially politicians shameless enough to claim credit for combat while exposed only to war-zone photo ops.

While no miracle drug or treatment can cure PTSD, Johnson and his colleagues have learned the importance of renewing and maintaining close ties among the band of brothers. That solidarity is essential in the ongoing fight for sympathetic heath care from the Veterans Administration.

The book recounts a number of infuriating incidents, like hassling a veteran claiming hearing loss as a by-product of the many firefights to which he had been exposed. With irrefutable logic, the doctors pointed out that the nearly deaf soldier should have donned his government-issued ear protection before firing back at the onrushing VC—the precise auditory equivalent of safe sex.

This book is only the latest reminder that the Vietnam veteran was the victim of sustained malpractice—sociological, military but, most of all, political. Drafted into combat while others stayed home, Vietnam GIs executed flawed strategies, somehow won an improbable victory, and then watched as Congress punted away their sacrifices. These scarred veterans finally returned home to the guilty indifference of their countrymen.

Although not a book for the fainthearted, James Johnson’s wrenching heart-cry underlines the sacrifices made by present and previous generations of American soldiers—and of society’s continuing debt to those who bear our battles.

Kenneth Allard is a former army colonel, West Point faculty member, and dean of the National War College. For almost a decade he served as an on-air military analyst with NBC News, is the author of four books, and is an occasional contributor to the The Daily Beast.