The Colony: Faith and Blood in a Promised Land 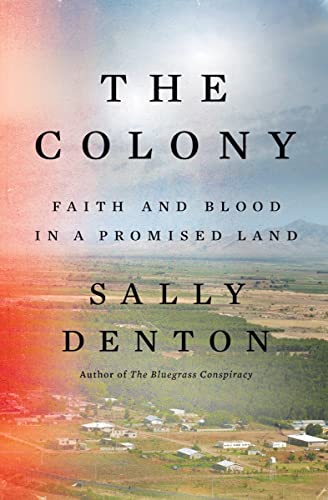 “There have been other books about the polygamist Mormons in Mexico, some of them first-hand accounts. The horrific revelations of this one will certainly remain with its readers.”

Sally Denton has a personal connection to the story she tells in The Colony. She is the great-great granddaughter of Jean Rio Baker, a wealthy Englishwoman who in 1849 gave up her money and position to travel to Utah and join the Church of Jesus Christ of Latter-Day Saints, which then practiced polygamy. Baker was to go on to live a long life, and considerably rue that fateful decision.

Denton has quite a tale to tell. The Mormon Church, under considerable pressure, abandoned polygamy in 1890. But the practice refused to die, and breakaway polygamist groups—officially no longer Mormon—were established not only around the U.S. but in Mexico. The book concentrates on the latter.

In November of 2019, a caravan of three SUVs set out from one Mexican polygamist outpost, La Mora, to another, Colonia LeBaron, a six-hour journey. The cars carried three women and their interrelated families, and before the day was out all three women and six of the children would be horrendously murdered, their vehicles riddled with bullets and set on fire. The prime suspects were the drug cartels that routinely operated in the area and transported their wares through the states of Chihuahua and Sonora.

But the book never satisfyingly explains who was actually behind the murders, in part because there were many suspects and much suspicion of the Mexican government’s official version.

After describing these inexplicable events, Denton’s focus goes wide. She quickly sketches in the story of Joseph Smith and the founding of the church in the 1820s. That’s when Smith said he discovered the golden plates that, when translated, became the Book of Mormon.

The early years were marked by conflict with traditional Christian neighbors, and Smith was assassinated by an angry mob, paving the way for Brigham Young to lead the flock. Events deteriorated further after the infamous Mountain Meadows Massacre, in September of 1857. An entire wagon train, including 120 men, women and children, were murdered. At first, hostile Indians were blamed, but eyewitness accounts from survivors firmly fixed the guilt on a Mormon war party. Only one Mormon leader was held responsible and executed.

Brigham Young himself thought the church’s future might lie in Mexico, and the first colonies were created in the 19th century. Chihuahua’s Colonia LeBaron was established in 1924, and from the beginning was more prosperous than its neighbors. It enthusiastically practiced polygamy long after it had left the ranks of mainstream Mormonism, and established huge water-intensive nut farms. Conflicts over water would intensify, and possibly have a hand in the 2019 ambush.

But the polygamists did more than practice agriculture. Under the sway of larger-than-life leaders like Ervil LeBaron, who probably had his own brother, Joel, murdered in 1972, the family reportedly became involved in a wide variety of criminal enterprises. At the root of the many deaths was the idea of “blood atonement,” a highly disputed doctrine that goes back to the Brigham Young era. “The killing of 49-year-old Joel LeBaron was only the start of Ervil’s ruthless campaign, the first of 33 known murders he committed,” Denton writes.

It's even more shocking to learn that Ervil’s crimes didn’t end with his death in a federal prison in 1981. The polygamist leader left behind rambling manifestos proclaiming who else deserved to die, and copies made their way to members of Ervil’s very large extended family (he had 54 children). Some of them proceeded to carry out as many of the death sentences as they could. Ervil’s young son, William “Heber” LeBaron, declared he was the new “One Mighty and Strong,” and proceeded, according to Denton, to set up a vast criminal enterprise that included car theft, narcotics, gun trafficking, and murder (including of children).

Heber was finally indicted in 1992 and given a lengthy prison sentence, but his sister and accomplice, Jacqueline “Tarsa” LeBaron, went into hiding and was not tracked down in Honduras until 2010. She was “considered the mastermind behind the murders,” Denton writes, but served only 15 months, with a fine of $134,000.

The concept of blood atonement also features in the Hulu miniseries Under the Banner of Heaven (based on Jon Krakauer’s book), which is a dramatization of the 1984 murder by cultists of a Mormon mother and daughter. All this is probably enough for any book, but then we learn that Colonia LeBaron and its leaders, as well as many Mexican officials, were closely involved in Keith Raniere’s wealthy NXIVM cult. Raniere, who had extensive operations in Mexico, was charged in 2019 with sex trafficking of children, conspiracy to commit forced labor, and other crimes as part of his group’s DOS offshoot that branded women and kept them under conditions of systematic sexual abuse. He is serving a 120-year sentence.

There’s a lot to unpack here, and although the book is for the most part very well done, it doesn’t end with any kind of firm resolution. Who killed those women and children on that lonely road? The trail gets confusing, in part because the colony housed over the years so many protaganists—all dual Mexican/American citizens named LeBaron—and there are so many possibly responsible parties. The Mormons in Mexico didn’t lack for enemies.

There have been other books about the polygamist Mormons in Mexico, some of them first-hand accounts. The horrific revelations of this one will certainly remain with its readers.